These texts are set for January 6 which in 2011 is on a Thursday.  The ideas here could be incorporated into weeknight celebration that includes worship in a freer form than often followed on Sunday morning.  Also, they could be used on Sunday, January 2, by congregations who do not have a weeknight celebration but do not want to ignore Epiphany.
Isaiah 60: 1-6
Arise, Shine!
Isaiah calls the people of Jerusalem to rise and shine because God’s glory is upon them for all the world to see.  Children heading back to school this week after soaking up God’s Christmas love and glory are ready to hear the call to shine also.  Verse 1 is their key verse.   Actually “Arise, shine!” is all they need.
One way to explain the symbol of light is to present children with several symbols, e.g. a national flag, a symbol for a sports team, and a cross.  As you present each ornament ask what it stands for and what it makes them think about.  Then tell them that the symbol for God is light.  Since we can’t make a picture of light, we use things that make light like a star, sun, candle, lamp.  Display a treetop star ornament that goes at the top of the Christmas or Chrismon tree and note its meaning.  Recall Christmas candle lighting services and note that we lit those candles to remind ourselves that God the light is with us.  Then, move to the discussion below of the candles in the worship center.  Or, name and explore other light symbols pondering how each reminds us of God.  Encourage the children (and other worshipers) to watch for light symbols scattered through the scriptures we read, the songs we sings and the prayers we pray today.
It is a good day to point out and explain your congregation’s use of candles during worship.  Many congregations light two candles on a central table.  The explanation that I grew up with was that one  candle was “God is the light of the world” (John 8:12) and the other “we are the light of the world.” (Matthew 5:13)  I’m sure there are other explanations.  Share any you know in the comments.  An acolyte may light a taper from one of the candles before snuffing both at the conclusion of the service.  The acolyte often walks down the central aisle and out the back door to call worshipers to follow the light of God out into the world.
Speaking of acolytes:  Lighting candles as a worship leader is a job that older children relish.  Including children in this simple act, training them how to do it and what it means, possibly even robing them to do it, tells them that they are a real part of the worshiping community.  Children as young as eight or nine can take this role successfully if the candles are short enough for them to reach easily.  In some churches serving as acolyte is an activity children sign up for just as they do for choir.  In others, the responsibility is tied to a particular church school class for the year.
“Arise, shine” is not about enjoying light.  It is a command to reflect and spread light.  Reread this several times pondering the difference in basking in light and shining out in the darkness.  Explore ways we can shine listing ways children can shine God’s love out at school, in the locker room, even in the back seat of a car as well as ways youth and adults can shine.  To encourage worshipers to shine, give each one a star sticker (glittery ones are the best!).  During a children’s message, stick a star on each child’s hand or forehead and say to each one, “Arise, shine.”  Or, pass baskets of star stickers to the entire congregations, instructing individuals to stick a star on the person at their side saying to them “arise, shine.”
Light hymns children can sing at least parts of with understanding:
“I Want To Walk As A Child of Light”
“Let There Be Light” with lots of short phrases of hope for the coming year
“This Little Light of Mine” – a spiritual about our ability to be light as well as enjoy light
Psalm 72:1-7, 10-14
A prayer for the king
There have been several opportunities to pray for civic leaders in the last few months.  With the wealth of other themes that speak to children clearly in today’s worship, I wouldn’t work on developing this one for the children.
Eph. 3:1-12
Paul’s ministry to the Gentiles
Demonstrate Paul’s mystery that God loves people all around the world by including people of as many different racial and ethnic backgrounds in worship leadership.  Some might even come in native dress or speak/read in native languages.  Include music from many different cultures.
Pray your way around the world.  Display a globe.  Explain that remembering the mystery Paul discovered, i.e. that God loves all people all over the world, your prayers today will move around the globe.  You might use the continents as your outline, offering prayers for each continent followed by time for worshipers to add their own voiced or silent prayers for that continent.
Present several pairs of portraits of people from different parts of the world asking which of these does God love.  The answer of course is that God loves both of them.  See the full description of this and a suggested resource in the Year C – 25th Sunday of Ordinary Time under the ideas for 1 Timothy. 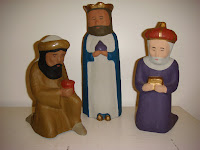 Tell the story of the three kings in your own words moving the kings from the crèche around the sanctuary as you talk.  Actually you will need three assistants, one to carry each king and perhaps a fourth to carry a star on a pole.  Start in a far corner of the sanctuary telling about the beginning of the trip.  Stop in another corner to tell about the visit to the palace, then come to the mother and child figures.  (These figures might be in a prominent spot at the front of the sanctuary or in a nook off to a side.)  Finally tell about the warning not to return to Herod and accompany the king figures back to their homes following another path around the sanctuary.  (After the story you might want to return the kings to their positions around the mother and child figures.)
Do a hymn study of “We three Kings of Orient, Are.”   Ask all worshippers to open their hymnals to the carol.  Walk through the verses explaining the significance of the three gifts.  Then sing the carol together.  This could be the outline for the day’s sermon or a fairly brief introduction to the hymn.
Interesting sidebar for children:  the carol is generally known as “We 3 Kings of Orient Are.”  Most children assume that Orient Are is the place the kings come from.  The truer to the meaning grammar for this verse would be:
We three kings of (the) Orient are bearing gifts.
We traverse afar, (over) field and fountain, moor and mountain, following yonder star.
Chalking the Door is an Epiphany ritual that can be done at church then repeated in the congregation’s homes.  It is basically a house blessing.  Using chalk, members of the congregation or household write on the door frame the year’s date and the letters C, B, and M (the initials of the three wise men).  Prayer is then offered asking that the door welcome many visitors during the coming year and that all who come through the doorway be blessed.  Write on the church doors during the worship service with the focus on the congregation’s home.  Then encourage households to repeat it in their own homes.  Print a simple blessing for use at both church and home in the order of worship and give out small pieces of white chalk for home use.  Below is a sample blessing.
God of doors and homes, bless this home this year and every year.
Bless all who come and go through this door, both those who live here and those who visit.
May all who enter through this door come in peace and bring joy.
May all who come to this door find welcome and love.
May the love and joy in this home overflow and spread into the community and the world.
The world is full of stories about people who were invited to go with the three kings, but declined for a variety of reasons all related to being too busy. In most this person later then decides to follow the kings, but is always too late and spends the rest of his/her life looking for the child.  The message in all the stories is to stay alert for signs of God at work in the world (like a star in the sky or an invitation) and to be ready to drop everything to respond.  The Other Wise Man, by Henry Van Dyke, is a rather complicated long American version of this tale.   Two of the best of these stories for children are:
The Legend of Old Befana, by Tomie dePaola.  In this well loved European folk tale, an Italian grandmother meets the kings, then spends the rest of her life leaving cakes and cookies for children during the night on January 6.  It could be used at least two ways in worship.
-          Read the first 13 pages ending with Befana telling the 3 kings that she has seen the star which kept her awake at night and that she had work to do. (approximately four minutes to read aloud)  Stop there to ponder the possibility of missing out on something wonderful because you were stuck in a grumpy rut.  Note that the new year has many possibilities.  Encourage worshipers to stay open enough to give them a chance.
-          Or, instead of stopping read one more page.  Then, stop.  Ask listeners what Befana might have done next.  Read or tell what happened in the next 13 pages (approximately three minutes to read the rest of the book).  Compare Befana’s (grumpy) face in the pictures of her sweeping with her (happy) face on the last page.  Ponder what made the difference.
Baboushka, retold by Arthur Scholey, is a Russian folktale about another busy grandmother who meets the three kings and is invited to join them.  At first she declines with lots of busy excuses, then decides to follow, but never catches up.  An angel points out that the shepherds left immediately after the angels sang to them.  The kings followed the star as soon as it appeared.  She is simply too late.  She keeps searching, carrying with her toys that she leaves with sleeping children in case they are the Christ child.  (About ten minutes to read aloud)
Posted by Worshiping with Children at 8:56 PM