Reading this text in which the speaker is telling a story and within that story quoting God extensively requires practice.  If worshipers of any age are to follow the passage, the reader needs to imagine himself/herself speaking dramatically before a large crowd.  Think ahead about how you will show with your voice the difference in what the Servant says and what God says.  Plan how to emphasize the words to communicate the ideas in each sentence.
In verse 6 the task of the servant Israel is to be a light to the nations.  Explaining to children who think literally what it means for either God or people to be light is not easy.  Describing the difference lanterns, flashlights, even candles make in the dark is easy.  But, connecting that difference with the difference that kind words and deeds of love and mercy make is quite a stretch.  Children’s brains simply have not developed the necessary transference ability.
Instead use this as an opportunity for some worship education about the use of candles in worship and even the responsibility of acolytes who light them or carry them in or out.  Many congregations place two candles on the worship table.  One means God/Jesus is the light of the world.  The other means we are called to be light for the world.  Some congregations intentionally carry a taper lit from one of these candles out of the sanctuary at the end of worship in order to remind us to follow God out into the world to serve and worship there.  Describe and even deomonstrate how your congregation uses candles in worship and explain in simple terms the significance of what you do.
Without getting tangled up in the “light to the nations” image, it is possible to explore Isaiah’s insistence that God doesn’t want us just to look out for ourselves, our church, and our community, but to be concerned for everyone in the whole world.  Reread  just verse 6, putting some of the ideas you’re your own words.  Then,
-     describe at least one way your congregation reaches out to people far away.  If possible select an activity in which children are involved, such as packing disaster relief kits.
-     think together of a prayer to offer for the people who live on each continent.  (Follow you progress using a globe.)  Then offer those prayers.
Psalm 40:1-11
Verses 9 and 10 are the key ones for children.  The psalmist declares that he has spoken about God’s saving action.  Children can be encouraged to speak about God in two ways.
Like the psalmist they can sing God’s praises.  Singing songs praising God with others at church and singing songs praising God on their own are important disciplines to cultivate.  Today children are more likely to listen to music than to sing it.  Encourage them to sing by telling stories in which singing is important and by doing a lot of congregational singing during worship today.  Assign worshipers a familiar hymn you have sung and discussed in worship today to sing in the car on their way home.  (Encourage them to do this whether they are singing a solo or with a “choir”.)
Children can also speak up on God’s behalf every day.  When the group is doing something that is wrong, even young children can say so.
This weekend the psalmist reminds us of Martin Luther King who spoke to the American nation on God’s behalf of the injustices being endured by African Americans.   He said, “I have a dream…” but he meant “God has a dream and will make it come true.”   His words about this dream inspired people to make difficult changes to right the injustices.  King and his followers also sang songs, spirituals that echoed his words.  Together the speaking and singing of God is powerful.  King spoke to and sang with millions of people.  Few of us do.  But, we can sing songs for God and we can speak up among our friends.  We can stand up for God’s ways and point out when people are starting to do things that are wrong.  Martin Luther King had to be brave to speak up for God and so do we.
1 Corinthians 1:1-9
For the next seven weeks we will be reading from 1 Corinthians.  This may be the first generation of children who need to learn what a letter is.  Strange, but true!  They are increasingly used to communicating in short emails or even shorter text messages that are sent quickly, read and generally deleted.  They have little experience with a several page letter that was carefully composed, read and reread, and then kept to reread in the future.  So before reading from this letter, take time to explore what it was and meant to the early Christians.
-     Bring a stamped envelope containing a several page handwritten letter, a handheld computer with an email or text message displayed, and the pulpit Bible opened to the beginning of 1 Corinthians.  If Harry Potter mania is still alive, refer to the messages the owls carried.  Talk about the similarities and differences in each one.  Some take more time to write.  Some are harder to deliver and take longer to reach the receiver.  Some are considered more worth saving to reread and to share with others.  Explain that Corinthians is a letter sent from Paul to the Christians in Corinth and that they thought it was so important that they saved it, copied it, shared it with others.
-     Display pictures of Corinthian ruins and modern day Corinth and have a map on hand to point out where Corinth is.  Ask if anyone in the congregation has been to Corinth.  The point is simply to realize that Corinth is a real place with real people.  (The photos below were found by googling “Corinth pictures.”) 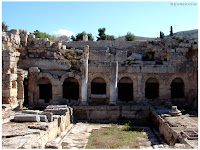 -     Briefly introduce Paul telling how he knew the people in Corinth.  Point out some of his other letters to other churches in the Bible.

-     Read verse 2 that tells to whom the letter is sent.  Stop as you get to the parts that describe the saints beyond Corinth.  “Hey, wait!  That is us.  We are….  You and you are…   We have mail!”
Then invite worshipers to listen to what Paul says as the letter begins.
If you are going to explore the gifts Paul recognized in the members of the church in Corinth and in us, offer children a worksheet printed with a large gift box.  Invite them to write about or draw into the boxes some of the gifts/abilities/talents God has given them.  Point out that God wants them to use those gifts to love other people in the world.  Invite them to drop their drawings into the offering plates as a way of thanking God for those gifts or to share them with you as they leave the sanctuary.  Suggest that in one part of the box they draw a cross or a heart for the gift of God’s love.

John 1:29-42
This is really two stories in one.  To help young readers follow it as it is read, plan for two readers and three actors to pantomime with them.  Find actors who are able to communicate with their faces and gestures.  They will probably need to be high school students or older.  The following script is based on NRSV.
++++++++++++++++++++++++++++++++++++++++++++++++++++++++++++++++++++++++++
Narrator (reading from lectern):  The next day he saw Jesus coming toward him and declared,
John:   “Here is the Lamb of God who takes away the sin of the world!  This is he of whom I said, ‘After me comes a man who ranks ahead of me because he was before me.’  I myself did not know him; but I came baptizing with water for this reason, that he might be revealed to Israel.”  And, “I saw the Spirit descending from heaven like a dove, and it remained on him.  I myself did not know him, but the one who sent me to baptize with water said to me, ‘He on whom you see the Spirit descend and remain is the one who baptizes with the Holy Spirit.’  And I myself have seen and have testified that this is the Son of God.”
Narrator:   The next day John again was standing with two of his disciples, and as he watched Jesus walk by, he exclaimed, “Look, here is the Lamb of God!”
John points at Jesus and faces two disciples.
The two disciples heard him say this, and they followed Jesus.
Disciples follow Jesus to one side and John retreats off the other side.
When Jesus turned and saw them following, he said to them, “What are you looking for?”
Jesus turns and give hand gesture for question.
They said to him, “Rabbi” (which translated means Teacher), “where are you staying?”
Disciples reach out to ask question of Jesus.
He said to them, “Come and see.”
Jesus gestures with hands to come with him.  They all move to other side.
They came and saw where he was staying, and they remained with him that day. It was about four o’clock in the afternoon. One of the two who heard John speak and followed him was Andrew, Simon Peter’s brother. He first found his brother Simon and said to him, “We have found the Messiah” (which is translated Anointed).
One disciple goes to bring Simon who is seated in first row to join him and Jesus.
He brought Simon to Jesus, who looked at him and said, “You are Simon son of John. You are to be called Cephas” (which is translated Peter).
Jesus looks at Simon and places his hands on his shoulders to welcome a friend.
++++++++++++++++++++++++++++++++++++++++++++++++++++++++++++++++++++++
Lamb of God is a nickname or a symbol for Jesus.  But, it is a hard one for children to understand.  To understand the Passover connection it will be necessary to retell that story.  To make the connection to the thank offerings, it will be necessary to explain the thinking behind that practice to children to whom it tends to sound cruel and weird.   Instead,
-     If your sanctuary includes Lamb of God images, point them out and simply say that they remind us of Jesus.

-     Point out in the worship bulletin the places you will pray, say or sing “Lamb of God” today.  Maybe suggest that children underline the name every time they find it in the bulletin.  Then instruct them to think “Jesus” as they use the term.
This is a story about people who told others what they knew and introduced their friends to important people.  John pointed out Jesus to his disciples.  Andrew brought his brother to meet Jesus.  It can be tied to theme about speaking your testimony in Isaiah and Psalm 40.  In this story the speaking is done in everyday situations among people who know each other.  It may be used to challenge children to speak up to their friends and siblings or to invite their friends to church.
Posted by Worshiping with Children at 2:21 PM