Many of the members of the lectionary study group of which I am a member are considering reading a story rather than preaching a sermon on the December 26.  That led to sharing favorite Christmas stories that can be used in worship.  Thinking that such a list might be useful, I started with their lists and added what I found in a couple of bookstores and libraries to create the annotated list below.  There is nothing on the list I have not read.  And, the list is incomplete.  For now I’m posting it as is and will add to it.  Please join the sharing by adding your favorite stories in Comments.  Though the list a little late for this year, it may yet be useful to some of us and it will be a good start on a list for future years.
Stories on this list need to:
-          Appeal to people of all ages
-          Have a theme that is often present in Christmas worship
-          Be easily available in libraries or book stores
-          Be read aloud in time appropriate to worship
(I offered reading times for those I could)
-          Have not been made into a televised Christmas special
Stories About Christmas Celebrations and Themes
Baboushka: A Christmas Folktale from Russia, retold by Arthur Scholey
(Reading time: 7-9 minutes)
The Legend of Old Befana, by Tomie de Paola
Both of these stories one from Russia and one from Italy describe grumpy old women who turn down invitations from the wise men to join them on their trip to see the baby king in order to keep up with their housework.  Each later changes her mind, follows after the kings, but is too late.  She thereafter distributes gifts of toys and/or cookies to children.  Of the two, Old Befana seems more changed and happier in the end to me.  But either story is fine. 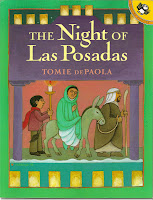 The Night of Las Posadas, by Tomie de Paola
Las Posadas is a Hispanic reenactment of Mary and Joseph’s search for a room in Bethlehem.  In this story Mary and Joseph players are held up in the snow.  The Mary and Joseph statue in the local church miraculously take their places.  The beautifully told story is a wonderful way for Anglo congregations to see Christmas as celebrated in other cultures.  De Paola’s art is of course wonderful, but it not essential to understanding the story.  Reading time is just under 10 minutes, but will have to be preceded by a brief introduction to Las Posadas.  Non- Hispanic readers will need to practice saying all the Spanish names in advance.
Why the Chimes Rang, by Raymond MacDonald Alden
In this 2006 release of a 1909 classic, the coin given to a little boy by his brother who gave up the trip to the great cathedral on Christmas Eve to take care of an old woman dying in the snow causes the cathedral chimes to ring.  Other magnificent gifts given out of the abundance of the givers did not do so.
The Give Away: A Christmas Story in the Native American Tradition, by Ray Buckley
All the animals of the forest gather worrying about the two legged ones who have lost their sense of who they are.  After describing the ways the four leggeds are lost, several animals offer to give up some of their abilities in order that the four leggeds can come to their senses.  Finally, the Great Creator announces that he will become a baby.  He points to the great ancient tree and notes that his self sacrifice will be needed to hold the child at both the beginning and end of his life.  The art creates part of the reverent mood of the meeting in a deep forest, but the story could be read without showing the art.
A good story to match with John’s Prologue.
Reading time: just under 10 minutes
Emma’s Gift, by Molly Schaar Idle
Emma begins Christmas disappointed.  It isn’t snowing and her grandmother isn’t coming.  She does like her grandmother’s present of a rainbow scarf, mittens and red boots.  Sent into town to buy a wreath, Emma gives the mittens to a man standing outside a soup kitchen, uses the scarf to rescue a kitten from a rain barrel and return him to the elderly woman who was his family, and gave the boots to the boy with a hole in his sneakers who was selling wreaths.  On her way home she is surprised to meet her grandmother who is proud of her when she tells what she did with her gifts.  This might be a good story for December 26th in the aftermath of all the gift giving.  Reading time: 10 minutes.
Great Joy, by Kate DiCamillo
Frances who lives with her mother in a mid-twentieth century city is fascinated by a homeless organ grinder and his monkey.  Her mother does not share her concern for the man.  On the way to the Christmas pageant in which she will be an angel, Frances stops to speak to the man and invite him to church.  She almost forgets her one line, until the man comes through the door.  She shouts her announcement of great joy.  In the last picture he is seen at the reception after the pageant apparently welcomed.  It’s a bare bones story about welcoming the stranger and those in need.  Reading time: just over 5 minutes. 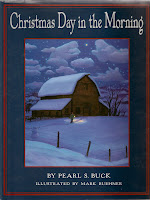 Christmas Day in the Morning, by Pearl S. Buck
A man recalls the Christmas he was 15 and got up early to do all the milking before his father came to get him to help with it.  It’s a bit of a tear jerker, but might offer worshippers ideas for similar gifts they could give their family.  Indeed, there is a note at the beginning from the illustrator who says that after hearing this story his children had gotten up in the middle of the night and cleaned the kitchen before the family Christmas party.
Reading time just under 10 minutes.
The Star of Christmas, by Maria T. DiVencenzo
During the night a little girl has a conversation with the ornaments on the Christmas tree about which is the star of Christmas.  In addition to the expected china doll and elf are a wiseman ornament that insists it is star because of the importance of giving, a silver bell that speaks of music, and a dove who reminds the girl of the importance of peace.  Of course, the child in the manger is proclaimed the star in the end.  Simple and a little trite, but OK.  Reading time: just over 10 minutes.
The Gift of the Magi, O. Henry (Candlewyck Press, 2008)
This well known story is presented here as a picture book.  While the drawings are lovely and help children enter the story about two adults, the words can carry the story on their own.  It would take over 10 minutes to read.  It would be equally appropriate on Christmas Eve or on December 26.  To catch the children’s attention, I would introduce it by saying like, “Most Christmas stories are about children.  This one is about two grownups.  They are young adults, not long married, very poor, and living on their own in the city.  They love each other very much.”
Penny’s Christmas Jar Miracle, by Jason F. Wright
Penny’s family saves spare change in a jar all year, then gives it as a special gift to someone at Christmas.  This year Penny suggests to her family that they use it to provide a neighborhood Christmas party.  As preparations begin Penny becomes aware that an elderly neighbor is sick at home.  So, she works with her family and neighbors to take the party to his house and to bring lots of Christmas jars to help with his medicine bills.  Reading time almost 15 minutes.
Retellings of the Biblical Stories

The Grumpy Shepherd, by Paddie Devon
The story of the shepherds, especially Joram, who was a very grumpy shepherd.  The sense of humor about  a shepherd who feels less than reverent as Christmas Eve begins might be especially appreciated by people who arrive at Christmas Eve worship stressed out by all the getting ready.  The story could be read without sharing the art.  Or, the picture of Joram on the cover of the book could be shown to introduce Joram and his frame of mind.  Reading time: 7-8 minutes.
To Whom the Angel Spoke, by Terry Kay
Three shepherds who are very different in shape, size, race, and outlook on life respond to the angel’s announcement of Jesus birth.  Their responses are both as different as they are and similarly joy-filled.  An artistic retelling of the story of the shepherds.  Art in the book is beautiful, but small.  The words could be read in worship without sharing the art.
Reading time: 15 -20 minutes.
A Shepherd’s Gift, by Mary Calhoun
A young shepherd boy chases his runaway lamb into the stable where Jesus has just been born.  He offers to help by bringing water and then offers his lamb as a gift.  They can shear the lamb to get a soft fleece for Jesus so he would not be scratched by the straw.  Golden light bathes the art in this sweet shepherd story.  Reading time: just over 5 minutes
Who Is Coming to Our House, by Joseph Slate
Simple drawings and sparse words delivered in a cadence tell of the animals getting ready to welcome a guest to the stable.  It is probably best used repeatedly (think “Goodnight, Moon”) at bedtime with preschoolers  during Advent.  The only “problem” with it is that it does not tell who Jesus is or the story of his birth.  Mary and Joseph appear on one page and the animals are gathered around them and Jesus in the manger on the last page.  Still, it could be read in worship to remind worshipers that just as each animal did something to welcome Jesus, each of us can do simple things to welcome Jesus today.  Since the animals are all about “welcoming” their guest, the story can be read on Dec 26 as part of a conversation of welcoming Jesus into our world every day.  It can be read in worship in 3-4 minutes, even without using the pictures and can take much longer to read with one inquisitive child.
Aaron’s Secret Message, by Marcus Pfister
Aaron, a young resident of Bethlehem, has a dream about a star.  The next day he sees Mary, Joseph and the donkey looking for a place to stay.  Eventually he leads them to the stable and helps make it warm and snug.  The star is overhead.
Reading time:5 minutes
Posted by Worshiping with Children at 4:31 PM

Email ThisBlogThis!Share to TwitterShare to FacebookShare to Pinterest
Labels: Christmas