Children enjoy this story of brothers who were fighting before they were born.  Parents appreciate the story of the parents who did everything wrong by today’s standards for parents.  The whole family is a mess AND still God loves them and calls them to be God’s people.  There is a lot of hope in that for less than perfect families today.
Do note that Joseph and the brothers who sell him into slavery show up the first two weeks in August.  Think ahead about which shared themes you will emphasize in these similar but different stories.
Ask a family with two sons who are good readers (maybe older elementary or middle school age) to read the scripted version.  Explain to them that their job is to help the listeners hear all the problems in this family.  Rehearse it with them once to show them where to stand and to encourage them to play their parts a little over the top.
& & & & & & & & & & & & & &
Genesis 25:19-34
Reader 1 reads from the lectern and is probably the worship leader.  Isaac stands beside Rebekah in the middle, (maybe on the top step).  Esau and Jacob stand just in front of their parents (maybe one step down) and Esau closer to Isaac and Jacob closer to Rebekah.
Isaac  and   Rebekah
Reader 1
Esau            and                  Jacob
Reader 1:  These are the descendants of Isaac, Abraham’s son: Abraham was the father of Isaac,
Isaac (pointing to self):  Isaac was forty years old when he married
Rebekah (pointing to herself proudly):  Rebekah, daughter of Bethuel the Aramean of Paddan-aram, sister of Laban the Aramean.
Isaac: Isaac prayed to the Lord for his wife, because she was barren; and the Lord granted his prayer,
Rebekah:  and his wife Rebekah conceived.    The children struggled together within her; and she said, “If it is to be this way, why do I live?”   So she went to inquire of the Lord.
Reader 1:  And the Lord said to her,
“Two nations are in your womb,
and two peoples born of you shall be divided;
the one shall be stronger than the other,
the elder shall serve the younger.”
Rebekah:  When her time to give birth was at hand, there were twins in her womb.
Esau (pointing to self): The first came out red, all his body like a hairy mantle; so they named him Esau.
Jacob (raising hand as if to say that’s me): Afterward his brother came out, with his hand gripping Esau’s heel (Lean down to grab Esau’s heel then stand up again); so he was named Jacob.
Isaac (proudly):  Isaac was sixty years old when Rebekah bore them.
Esau (stand tall with feet planted wide):  When the boys grew up, Esau was a skillful hunter, a man of the field,
Jacob:  while Jacob was a quiet man, living in tents.
Isaac:  Isaac loved Esau, because he was fond of game; (Put hands on Esau’s shoulders)
Rebekah:  but Rebekah loved Jacob. (Put hands on Jacob’s shoulders)
Pause  (Parents withdraw hands and boys step forward a little)
Jacob:  Once when Jacob was cooking a stew,
Esau:  Esau came in from the field, and he was famished.   Esau said to Jacob, “Let me eat some of that red stuff, for I am famished!”
Jacob:  Jacob said, “First sell me your birthright.”
Esau:  Esau said, “I am about to die; of what use is a birthright to me?”
Jacob:  Jacob said, “Swear to me first.”
Esau:  So he swore to him, and sold his birthright to Jacob.
Jacob:  Then Jacob gave Esau bread and lentil stew,
Esau:  and he ate and drank, and rose and went his way. Thus Esau despised his birthright.
Based on the New Revised Standard Version
& & & & & & & & & & & & & &
F Before reading this text, invite the children forward to explain what a birthright was.  From a preschool room bring a collection of plastic farm animals and housekeeping equipment.  Explain that when a man died in Bible days, all his stuff was divided among his sons (sorry, daughters).  The oldest son got twice as much as any younger son.  Identify several boys as brothers.  Give half of everything to one of them and split the rest between the others.  Note that since the oldest had more than he could possibly take care of, he COULD invite the younger ones to stay at home and help him.  But, he would be the boss.  Agree with the children that this was very unfair and you are glad it doesn’t work that way today.  Then, repeat the word “birthright” and tell the children they will hear about two brothers and the older’s birthright in today’s story.  Then send them back to their seats to listen.
D Children, who hear a lot about making good choices, enjoy hearing about Esau’s really poor choice.  Esau chose what he wanted right now without thinking about what he was giving up to get it.  Parents work hard to get children to avoid making that mistake.  And, throughout our lives we all struggle with what we want right now and what is of long term value.  Two books connect neatly here.

F Way back in the first Harry Potter book, Hagrid who loved magical animals got a chance to get a dragon egg.  He really wanted to raise a dragon.  He wanted it so much that he did not think ahead.  He ignored the fact that owning dragons was illegal, that dragons grow very fast, have poisonous fangs, nasty dispositions, and breathe fire.  (Hermoine had to remind him what was likely to happen to his wood house.)  And, there was trouble.  It soon became impossible to hide the growing, rambunctious dragon.  Finally, Harry, Ron and Hermoine managed to smuggle the dragon (Norbert) out of Hogwarts to people who could get it to a safe place.  But everyone got in trouble in the process.  Hagrid finally regretted getting the egg, just as Esau eventually realized that his choice to sell his birthright for a bowl of stew was very foolish.  Unfortunately for Esau, his bad choice had much more serious long term consequences than Hagrid’s did.  (See Harry Potter and the Sorcerer’s Stone, chapter 14, for all the glorious details.) 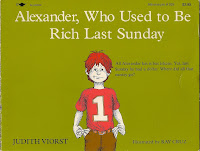 F In Alexander Who Use to Be Rich Last Sunday Judith Viorst describes a long series of bad choices a boy makes spending the dollar his grandparents brought him.  Alexander (yes, the same Alexander of Alexander and the Terrible, Horrible, No Good, Very Bad Day) really wants to save it for a walkie-talkie, but frithers it away foolishly.  Since the book was written in 1978, you may want to update the prices, e.g. no 11 cent candy bars.  Alexander and Esau both need help thinking ahead when they make choices.
Psalm 119:105-112