Exodus 12:1-14
_ There are two possible additions to the Moses display for this week.

Since the lectionary jumps from the burning bush to instructions for Passover, add a walking stick to the display today as you tell the story of the plagues using the text below.  Do this to set the stage for reading the Passover instructions in Exodus.  Use the walking stick again next week to cross the divided sea and move into the desert.

Place several pieces of matzo in a basket to recall the unleavened bread everyone ate as they left slavery in Egypt.  If you are celebrating Communion today, note that Jesus was celebrating Passover when he invented Communion.  The bread he broke was matzo.  To emphasize that connection use matzo (available in most large groceries) as you celebrate the sacrament today.
p p p p p p p p p p p p
_ Fill in the gap between the burning bush and Passover by telling the story of the plagues using a walking stick.  (FYI the story of the plagues is not included in the Revised Common Lectionary anywhere.)  Enlist the choir in advance to serve as the voice of pharaoh.  The choir says “No way!” every time Moses threatens a plague, points their fingers dramatically as they say “Go!” after the plague arrives, and folds their arms over their chests while saying emphatically “Not a chance!” after Moses calls off the plague.  Clearly cue them with “and pharaoh said.”  One brief rehearsal will help.
Moses went to Pharaoh and said, “God says, ‘Let  my people go!’”  But Pharaoh said….(point to choir).  This started a long contest between Pharaoh and Moses and God.  It began with blood.  Moses put his walking stick into the Nile River (stick the walking stick into the imaginary river in front of you) and the river turned into blood.  Pharaoh was not impressed.
So Moses said to Pharaoh, “God says, ‘Let my people go or I will bring hundreds of thousands of frogs out of the Nile River…’.”  And Pharaoh said… (point to choir).   So Moses held his walking stick over the river (hold up your walking stick) and hundreds of thousands of frogs came out of the river.  Describe finding frogs in your closet, in your shoes, and under your pillow.  (Pointing to the choir) “and pharaoh said…”   So Moses made the frogs stop (lower the walking stick).  But when the frogs were gone, pharaoh thought again about losing all the Hebrew slaves (pointing to the choir) “and pharaoh said…”
Next Moses said to pharaoh, “God says ‘Let my people go or I will bring millions of gnats upon you and your people’.”  But pharaoh said (pointing to the choir)….    So Moses stirred up the dust with his walking sticking (stir on the floor with your walking stick) and an enormous swarm of gnats filled the air.  Describe how the people swatted gnats and how itchy the gnat bites on your elbow and behind your knees were.  So, (pointing to the choir) pharaoh said….   Moses lowered his walking stick and the gnats flew away.  After he had swatted the last gnat, Pharaoh breathed a sigh of relief and then pharaoh said,  (point to choir).
Repeat this for the plagues of flies, livestock disease, boils, hail and lighting, locusts, and darkness.  Enjoy the contest which pharaoh always loses.  Then note that there was one more round and that it was scarier and sadder than any of the others.  It would not have been needed had pharaoh gotten the message.  But he did not.  Place the walking stick in the display.  Read Exodus 12:12 to tell what God would do.  Then noting that God had a very special plan for the slaves to survive that night, read the entire Exodus text.
Warning:  Children, especially first-born children, are both offended and frightened by this story.  It seems unfair to them that because pharaoh was bad, the children of Egypt should be killed.  It also surprises and alarms them that the God who loves and takes care of children would do such a thing.  They (understandably) tend to blame God rather than pharaoh.  Pointing out that pharaoh made it necessary is worth a try, but often does not satisfy thoughtful children.  It is better to go quickly through this part to focus on the detailed directions for eating the lamb, painting blood on the door, and getting ready to leave for freedom.
p p p p p p p p p p p p
_ “Moses in Egypt” (26 minutes) is an artful telling of the story of Moses from his birth up to the escape from Egypt.  Danny Glover narrates the story over well chosen music and still-art illustrations.  It is aimed at older children, youth and adults and is not cutesy in any way.  It ends with lots of expressive pictures of the faces of the slaves as they walk away from Egypt.  Order from Rabbit Ears at  http://www.rabbitears.com/products/43147-moses-in-egypt.
The plague portion of “Moses, Prince of Egypt”, the animated Dreamworks film, is one I would NOT show in worship.  The destruction is very visual and the suffering of the people is obvious.  The depiction of the Passover plague shows many children going about daily tasks only to fall over dead as a spooky grayish cloud passes over them.  It frightens and worries some children.

LATE ADDITION!!!        While working on the texts for September 18, I discovered that there is a worship education series in or at least a Lord’s Prayer connection between many of the September texts (especially the Exodus stories) and Jesus’ prayer.  So, I’m doubling back to add a new possiblity for today.  Watch for others in future weeks.
Begin intercessory prayers today by recalling that this story began with pharaoh holding God’s people as slaves.  Pharaoh thought he was king of the world, even thought he was a god.  But when people cried for help, the real God answered.  God’s kingdom was coming and God’s will was being done in pharaoh’s Egypt.  Invite the congregation to pray with you for places where God’s kingdom is wanted and God’s will needs to be done today.  The congregation’s response will be a familiar phrase from the Lord’s Prayer, “Your kingdom come, your will be done on earth as it is in heaven.”  Remind them as they pray about tough situations today to remember with hope what God did for the slaves in Egypt.  As I write this I’d include petitions about Libya, political deadlock, problems between people in classes/teams/offices/families….
Psalm 149
I’m guessing this psalm was included as a way of celebrating the Passover from slavery to freedom.  Unfortunately, the last half of the psalm also celebrates vengeance.  Adults can talk about why such verses got into the Bible.  But children hear little of that conversation.  So, I would either read only verses 1-6a or choose Psalm 119:33-40 instead.
Psalm 119:33-40 (the alternate psalm)

This is a section of the long alphabet poem celebrating God’s Law.  All the lines in this section begin with the fifth letter of the Hebrew letter – He.  Each line begins with a verb asking God’s help with living by God’s Law.  After exploring the laws about loving neighbors in Romans, children are ready to hear these prayers.  The verbs in the Good News Translation (teach me the meaning of your law, explain to me, keep me obedient, give me the desire to obey, keep me from paying attention to what is worthless, keep your promise to me, save me from insults, and I want to obey your commands) make more immediate sense to children than those in the NRSV (teach me your statutes, give me understanding, lead me in the path, turn my heart to your decrees, turn my eyes from vanities, confirm your servant in your promise, turn away the disgrace, and I have longed for you precepts).  After putting some of these prayers into your own words, encourage worshipers to create their own prayers about loving our neighbors as God commands us.  For example,
Help me be a loving brother or sister.
Show me how to be kind to those who are not kind to me.
Help me find ways to be a peacemaker at school.
Romans 13:8-14
_ Verses 8-10 are the heart of this passage for children.  To help them explore it write each of the 10 Commandments on a separate poster board.  Hand them out to ten children (or to 10 worshipers of a variety of ages).  Point out that these rules teach us how to love God and love each other.  Then, read each rule and decide with the congregation whether it is about loving God or loving people.  As you do, reposition the poster bearers to stand in two groups – those whose rule is about loving God and those whose rule is about loving people.  After all are sorted, thank the “Love God” poster bearers and send them to their seats noting that though loving God is surely important, today we are thinking about loving people.  Then, open your Bible or go to the large worship Bible to read Romans 13:8-10.  As you read each law Paul mentions point to that poster or ask its bearer to raise it.  Thank them for helping the congregation pay attention to Paul’s letter and send them back to their seats.
_ Before the prayers of intercession, invite worshipers of all ages to write names of people they encounter every day on a piece of paper (perhaps a corner torn off a worship handout).  These may be people it is hard for them to love or people for whom they have a special prayer.  Collect these names by passing prayer baskets (like passing offering plates) that are put on the central worship table.  The prayer leader then offers verbal prayers of intercession perhaps holding his/her hands over the baskets or holding them up in the air.  (If your congregation gathers prayer requests during worship, this could be done at the same time.)
Matthew 18:15-20
Two children’s books provide great illustrations of resolving conflict by talking with the other side. 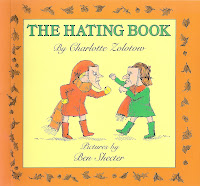 The Hating Book, by Charlotte Zolotow, tells of a little girl whose best friend has suddenly dropped her.  The girl is very angry, but finally at her mother’s repeated urging, she goes to talk with the friend and discovers that there has been a big misunderstanding that is easily reconciled.  This very terse story in Seussian language can be read in less than 3 minutes.  Though the pictures are wonderful, the story can be understood without them.

In Enemy Pie, by Derek Munson, a perfect summer is ruined when Jeremy Ross moves in next door and becomes enemy number one on the young narrator’s list.  Fortunately, Dad has a recipe for enemy pie and promises to make it.  The narrator must help by providing one of the secret ingredients – he must play with the enemy for one entire day treating him well.  Of course while the two talk and play together, Jeremy morphs from an enemy into a friend.  The story can be told in your own words or read aloud in about 10 minutes.
And if your children are among those who are just starting back to school next week, take a look at the Back To School! ideas.  This will definitely be the last week for this reminder this fall!
Posted by Worshiping with Children at 8:17 PM