This year the Nobel Peace Prize is shared by three women from Northern Africa and the middle East.  They look and dress like Deborah would have looked and dressed.  Display pictures of them from the internet and briefly introduce them as you introduce Deborah who was a leader like they are.

By the time you highlight the servant metaphors in the first part of the psalm and put the last part into words that make sense to children, nobody of any age particularly cares.  So, given the richness of the other texts for the day, I would pass over this psalm today.

This dire outline of a frightening Day of the Lord is not for children, but adults.  The prophet’s message that people do not believe that God acts in history is beyond a child’s view of the world.  There are other Day of the Lord texts that make more sense to them.

F If you did not have this psalm read by readers of different ages on October 23, do so today to celebrate God’s presence in the lives of all the generations.  Enlist a child, a teenager, a young adult, a middle aged adult, an older adult and an elderly person, including readers of both sexes.  (I have omitted the verses about our vulnerability before God’s wrath because I think those verses require careful explanations to avoid fearful confusion among children.  The verses below bypass that issue, but still communicate the psalmist’s message.)

Reader 1:      Lord, you have been our dwelling place
in all generations.

Reader 2:      Before the mountains were brought forth,
or ever you had formed the earth and the world,
from everlasting to everlasting you are God.

Reader 4:      For a thousand years in your sight
are like yesterday when it is past,
or like a watch in the night.

Reader 5:      You sweep them away; they are like a dream,
like grass that is renewed in the morning;
in the morning it flourishes and is renewed;
in the evening it fades and withers.

F Use this psalm praising God to invite worshipers to flip through the section of hymns praising God in your hymnal.  You could simply point out a few of those sung often in your congregation and briefly highlight a key phrase in each one.  Or, you could have a singing sermon in which you speak briefly about the message of several hymns, singing verses or whole hymns together as you go.  Some that children can sing at least parts of include:
A Mighty Fortress Is Our God
Immortal, Invisible God Only Wise
Great Is Thy Faithfulness
God, You Spin the Whirling Planets
I Sing the Mighty Power of God
There’s A Wideness in God’s Mercy

F The  hymn “Our God Our Help in Ages Past” is based on this psalm.  If you sing it, take time to point out the connection and put one or two verses into your own words.  Verse 3 about a thousand ages being like an evening to God fascinates children when it is pointed out.

F Print on bulletin covers, project, or enlarge and display a copy of Gustave Dure’s version of the Last Judgment (it is in the public domain).  It is hard to see details, but point out the sweep of the image with God at the top surrounded by light and figures in the light, angels casting out those who have been judged in the middle and figures falling into the darkness at the bottom.  Point out that there are lots of such scary pictures and that they are truly frightening.  Even, by the time Paul was writing letters to his friends people had seen or heard about such pictures and were scared.  Then clearly state that Paul insisted that they need not be frightened or worried.  Paul told them that they would be at the top in the light near God in such pictures.  Introduce the terms “children of light” and “children of dark”, then read the text.

F Verse 11 probably offers most to children.  Paul says because they are children of light they can have hope.  They belong to God no matter what happens around them.  Given that, they can love and support each other.  A simple true example of this happened in my church school class last week.

A teacher leaned in to tell a very squirmy, wiggly first grader lying next to her that she needed to do something with her feet so she would not accidently kick and hurt the girl in front of her.  That girl turned around, scooted over a little on the floor and said, “You could come sit beside me.”  The squirmer smiled, sat up straight and scooted up.  The two later worked on a craft project together.  That is the kind of encouragement Paul is talking about. 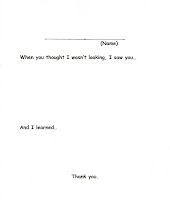 F Go to Rumors: Sermon Helps for Preachers with a Sense of Humor and scroll about two thirds of the way down the blog to find “When You Thought I Wasn’t Looking” a poem about parents encouraging their children.  You might create other tributes following the poet’s format, “When you though I wasn’t looking, I saw… and I learned.”  You might even create some about what you have learned from the congregation.  Encourage worshipers to create some of their own for people who are shaping their lives.  Children might use this worksheet to write or draw their own verses.

F Before singing “God of Grace and God of Glory,” briefly identify it as a hymn the Thessalonian Christians could have sung after reading Paul’s letter. The verses sing of all the hard things people face.  The chorus is a response to those hard things. Point out the repeated words in the chorus and encourage young worshipers to sing them even if they can’t read all the other words. 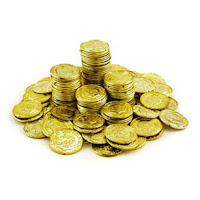 F The Contemporary English Version of the Bible calls the money in this parable gold coins rather than talents and provides a good reading of this text.  If you use a translation that calls the money talents, take time before the reading to remind young worshipers that a talent was a coin in Jesus day – a coin that worth a very large amount of money.  Also point out that these talents are not the abilities and skills that we call talents today.  For added emphasis, present a collection of large golden coins (check a party store for Mardi Gras coins year-round).  After defining talent, count coins into the three piles of the beginning of the parable and encourage worshipers to listen for these piles as you read.

F All the coming and going in this parable makes it ideal for younger children to act out during worship.  You need a minimum of four children, but can add others as the family of the master/mistress.  They will need to rehearse before worship with the reader. Costumes as simple as head scarves and head ties are grand additions for both the actors and the watching congregation.

Setting the stage:
Draw “$$$$” in green marker on 15 brown paper lunch sacks.  Pile 8 of them in one stack to one side for the master to give the servants.  Pile 5 in a second pile and 2 in a third pile.  (These could be in place at the beginning of worship or the reader could take the role of the stage manager putting props in place, briefly explaining what is in each bag, and introducing the actors before going to the lectern to read the story.)

The action:
The master or mistress or master’s family stands by the big pile with the servants in a line before him/her/them as verses 14-15 are read.  He/she/they give the bags to the servants, then move to the edge of the stage.

The first servant takes his/her bags to the pile of 5, adds them, stands behind the pile folding arms across chest and smiling broadly.  (verse 16)

The second adds the two talents to the pile of two and strikes the same happy pose.  (verse 17)

The third sneaks that bag off to one side, covers it with a square of brown cloth or an inverted flower pot, sits in front of it as if to hide it, folds arms over chest with a frown on his/her face.  (verse 18)

He/she/they go to the first servant, put hands on hips and look at the servant for an explanation (verse 19).  The servant waves one hand over the big pile of bags with a smile.  The master/mistress/family shake the servant’s hand (verses 20-21).

The process repeats with the second servant (verses 22-23).

F If it is stewardship season, after exploring the parable offer children (or all worshipers) wrapped hard candies.  You could give them small bags of 5 each or invite them to take two from baskets of candies as they are passed up and down the pews.  One is for them to enjoy now.  The remainder is/are for them to pass to other people to let them know that you care about them.  Suggest that they might want to share a candy with someone in their family to show their love.  Or, they could watch for people who don’t often get such attention – maybe someone at school or other place they go this week.  Tell them that they are stewards of the candies and are to use them to share God’s love.

Posted by Worshiping with Children at 4:52 PM