RThe RCL offers a different set of readings for Thanksgiving for each year.  They are unique but share common themes.  Go to Thanksgiving Day (Year A) for suggestions about Thanksgiving in general including:
Ø Ways to include children in community Thanksgiving services
Ø Commentary from child’s point of view on the traditional Thanksgiving hymns
Ø One children’s story book about gratitude
Ø A Thanksgiving homework assignment for worshipers
R To those I add:

In the congregation’s prayers include prayers for the long holiday weekend.  Some children are looking forward to seeing extended family members. Others are dreading a boring, nothing special holiday.  Those excited about family gatherings often face undesired seating assignments at “the feast,” uncomfortable sleeping arrangements, and long trips in cramped cars.  All are worthy of prayer.

Focus on the word “blessings” in the Doxology.  Define blessings as the good things that make life worth living and that you know are gifts.  Name a few of your own.  Invite worshipers to name some of theirs.  Then sing the song. 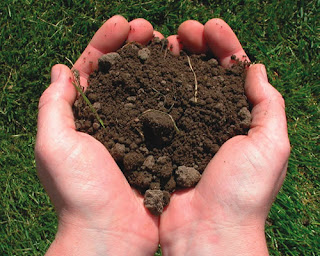 R Often when children list things for which they are thankful they jokingly list lots of seemingly silly things.  Pick up on that with a “thank God for dirt” discussion.  List all sorts of wonderful things about dirt
Ø Mud pies
Ø Good smell of freshly plowed dirt
Ø All the worms, snails, etc that live in dirt and help enrich it
Ø It turns seeds into flowers, trees, and food
Ø Clay that makes jars, mugs, even bricks with which to build houses
Ø Minerals we use for medicines
Then read verse 21.  From there you can jump to Matthew’s flowers of the field.

R Repeat the process with animals and Matthew’s birds of the air.

REMEMBER that farm children will be quite aware of the problems with the “bad year.”  Urban children are less likely to even register that it has been a bad year.  It may help the urban children to hear about higher food prices and even foods that are harder to find in the stores after a “bad year” on the farms.

R This psalm plus the Joel text may be an opportunity to identify what makes a “good year” and a “bad year” – both agriculturally and in all of life.  With this as background, you can then explore the differences in saying thanks in good and bad years.

R Paul instructs Timothy to lead his people in praying for community and national leaders.  In the US after an election in which people were anything but respectful of each other ( I am posting this in September), praying for our leaders no matter whether we voted for them or not, is part of much needed healing.  Children miss out on such prayers when they are voiced in broad general terms.  To help them join in…

Ø Together make a big scribble on a poster.  Write the names of a leader or governing body in each section.  Then go through the list identifying prayers for each one.

Ø In an “eyes-open prayer” display pictures of people, locations, even events from the last year.  Offer prayers for each one being specific.  This could be a matter of projecting pictures for all to see as a prayer leader prays about them.  Or, it could be a prayerful discussion with the children or the whole congregation.

Ø     If your ritual includes prayers for leaders on a regular basis, chances are good they are general lists of officers and types of leaders.  Take time today to identify the people who currently serve in those offices and put the prayers for them into your own words.

R Commentators point out that the leaders Timothy and his friends were to pray for were Romans who were trying to kill as many Christians as possible.  In a polarized nation and world this is a call to pray for people with whom we agree and for people with whom we disagree.  Create a responsive prayer in which the worship leader describes a person or group on one side of an issue and then the leader or group on the other side.  After each petition the congregation adds, “Lord, bless them and keep us living together in peace.”  Pray for countries on different sides of international conflicts, political leaders, and local groups.

R The Christological hymn describing Christ as the mediator is hard for children to understand.  First, they need a definition of mediator.  Then, they need help to get around the idea that God is big and scary and Jesus is the good guy who helps us deal with God.  On Thanksgiving I’d simply read this part without drawing much attention to it.

R This text is also read on Proper 20 in Year C.  Go to Proper 20 (Year C) for ideas about God’s love for all the people of the world that may or may not be applicable on Thanksgiving.

R This passage shows up twice in the lectionary - on Thanksgiving Day and on the Eighth Sunday after Epiphany which falls just before Lent.  It reads differently and asks for different consideration at these two moments in the church year.  On Thanksgiving it calls us to look to God with gratitude and trust.  Before Lent it admonishes us not to get all tied up in our clothes and financial worries.

Show pictures of baby animals and adults animals.  Marvel at how they change.  End with pictures of humans at different ages.  Note that God has a different plan for each one – and that God’s plans are good.

Read and enjoy the opening of Peter Spier’s picture book People.  Skip all the information on the opening page.  Start with “We come in all sizes and shapes…” and read through “All of us want to look our best.  Still what is considered beautiful or handsome in one place is considered ugly, and even ridiculous, elsewhere.”  Point to and briefly enjoy all the differences in the pictures.  Do be aware that this book was published in 1980 and so includes some cultural distinctions that are no longer accepted.  So focus on the pictures rather than the verbal country identifications on the page about clothing.  Then reread verse 25 and connect it to all the Spier drawings.

R Ask children’s classes to prepare banners by pasting birds and/or flowers and/or people all over a large swath of paper or cloth.  There may be one banner with all mixed in together or three topically separate banners.  For a community service children from several churches could gather the pictures and turn them over to children/adults of one of the churches to put together.  Adults could mount the banners on poles for older children to carry in during an opening processional.  Plan for them to be displayed throughout the service.

Posted by Worshiping with Children at 3:38 PM