In many ways this is the last Sunday of the Lectionary Year.  Next Sunday (Christ the King or Reign of Christ Sunday) is rather a hinge or bridge between the two years.  At some point during the service, point out the green paraments and other signs of this season, recall their meaning, and alert worshipers to coming changes in colors and other worship props.


a  Hope is the theme that underlies all today’s texts.  The Old Testament texts proclaim that God has a wonderful plan and that in the end that plan will be realized.  The New Testament texts take the darker side of the theme warning that though God’s good plan will one day be realized there will be some tough times before that happens.  It is in such times that we need to live on hope.


a  One way to introduce the theme is to remind worshipers what it is like to see a movie for the first time and the fifth time.  Recall your frightened, worried feelings the first time you watched the scary parts of The Lion King or Beauty and the Beast.  You wanted to warn the characters of the dangers.  Then describe watching the same scenes for the second, third, even fifth time when you knew the ending.  Note that once you knew the ending you sometimes wanted to tell the hero not to worry during the scary parts and sometimes you want to warn the heroine to be careful when everything is going well.  The Old Testament texts tell us the ending.  The New Testaments texts advise us on how to live until the ending comes.


a  Peace or Shalom are the words that are not in this reading but are what the reading is all about.  Isaiah insists that God’s plan is working toward peace or shalom for everyone.   Point out the pictures of Shalom/Peace that Isaiah paints with words, e.g. in God’s new world there will be no crying (not because people will demand that you not be a cry baby but because there will be nothing to cry about), no one will get sick and die young, and the wolf and the lamb will feed together.  Then challenge the children to draw pictures of what they think shalom/peace looks like.  They might draw pictures of Isaiah’s words or draw pictures from their own experiences with peace or from their imaginations.  When the congregation is gathering prayer concerns, invite children to place their pictures on a large map of the world or tape them on a globe. 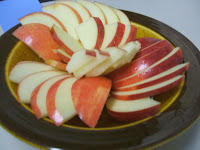 a  If you speak about knowing the end of the movie, introduce this text as the ending of the story of God’s world.  Since there is a lot of poetic imagery that will be hard for children to grasp, pick one to unpack especially for them.  One of the easiest is verse 21 and the first half of 22.  Give worshipers apple slices to eat.  Talk about how good they are and describe the work of the migrant laborers who tend and pick them.  Note that those people often do not have enough money to buy good food for their families.  Read the two verses.  Point out that when God completes creation, this situation will change.  Tell about one way your congregation is working with God to help bring this change, e.g. food pantry, migrant ministries, etc.


This could be presented as a time for children.  It would be even more effective if included in the sermon with ushers passing bowls/baskets of apple slices to the whole congregation.


a  The second verse of this poem about trusting God is key for children.


I will trust in the Lord and not be afraid
For God is my strength and power.


What it needs is a story that illustrates its abstract truth.  David facing Goliath is one good choice.  Rather than tell the whole story, focus on David’s conversation with Saul (1 Samuel 17: 32-37) and his response to Goliath’s taunt (1 Samuel 17: 45 and 47).  Because David trusted God’s power, he was able to do something about Goliath while others cowered in fear.


a  Being able to do something scary because you trust in a power greater than yourself is like a child jumping into a parent’s arms in the swimming pool or attempting a dive off the diving board with that parent watching from the side.


a  Older children will be interested in the trust expressed in the hymn “Eternal Father Strong to Save.”  Before singing it, introduce it as a hymn loved by sailors and as the Navy Hymn (if appropriate).  Point out the repeated last line and note that the first verse remembers that sailors can trust God because God made the sea.  Other verses recall that Jesus calmed the storm at sea and once slept through a storm that scared his disciples badly.


a  The fact that this comes from the last chapter of the last book in the Old Testament is of interest to some children.  Show them it’s location in the Bible.  Read the 2 verses.  Reread the last phrase about God bringing healing and briefly list all the different kinds of healing God promises.  Then, note that people had to wait a long time for God to act.  Point out that between that page and the first page of the New Testament when Jesus is born there were 400 long years.  Then, tell them the secret we know that the people living during those 400 years did not.  Jesus was coming.  If you wish, connect it to Christ the King/ Reign of Christ Sunday next week and Advent that follows.  This could be done as a Time for Children.  Or, invite the children to gather around you and the Bible for the reading of this text for the day.


a  This psalm of praise and thanksgiving was suggested for last week and seems to fit better there than here.   I’d use the Isaiah psalm today. 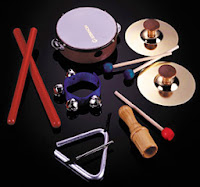 a  Go to last week’s post at Year C Proper 27 - Psalm 98 for a reading with rhythm instruments, a coloring sheet with which children illustrate this psalm, and a script for a responsive congregational reading of this.


a  The writer of this letter has two bits of advice for people waiting for God’s new creation to be realized.


a  The first is that we are to work while we wait.  Work is described as a blessing and a good way to be God’s partners in creating the new creation.


a  If you develop this theme extensively, remember that school is children’s work.  Cite illustrations from children at work at school among others about adults at work in a variety of jobs.


a  People often ask children “what do you want to be when you grow up?”  Use this as an opportunity to urge children to choose work that makes the world a better place.  Point out that they are called not to do something just because they like to do it, but to do something that will make life better for everyone around them.  Describe ways a variety of jobs do that.

a  “Earth and All Stars” describes ways people work and praise God together to make God’s dream come true.  Before singing it point out some of the ways we work today listed in verses 2 and 3.  Also point out the repeated chorus, practice it once, and challenge even non-readers to sing along.  (And, yes, the chorus comes straight from Psalm 98 which was suggested for last week as well as this week.)


a  The second is don’t be weary of doing what is right.  When God’s new creation is complete, it will be easy to do what is right.  Everyone will do it every day.  But, now it is often not so easy.  Doing the right thing is not always wildly fun or exciting or cool.  Sometimes people look at you funny or laugh at you.  (Choose keeping one or two of the Ten Commandments or keeping Jesus’ two great commandments as illustrations.)  Reread verse 13 and identify it as something to remember when we get tired of doing what is right.


We are not always forthright with children about this fact.  They appreciate our honesty when we are.  It also encourages them when they are choosing to do something they know is right, but that they definitely would prefer not to do. 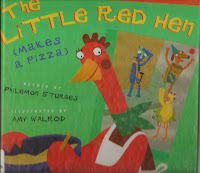 a  The Little Red Hen Makes a Pizza, retold by Philemon Sturges, tells of a hen who decided to bake a pizza, called repeatedly on neighbors to help her, kept on working when the neighbors declined to help, then shared the pizza with the neighbors.  Stop before the neighbors do the dishes to ponder why the hen shared her pizza with the neighbors who refused to help make it.  In a way this goes against Paul’s “anyone unwilling to work should not eat,” but it is also an example of keeping on working for God's peace no matter what is going on around you and setting an example like Paul did.  It would be possible to end the discussion there or to follow it by reading the last two pages on which the neighbors do the dishes.  If you do the latter, ponder the effect of the hen’s sharing example on those around her – even when it might look a little crazy.


a  The basic message of this passage is that there will be tough times and that the only thing to do during tough times is to endure them trusting that in the end God will win.  The other readings for the day offer more specific help for sharing this message with children.


a  Luke’s insistence that no matter what awful things happen God is still in control of the whole world is an opportunity to highlight “thine is the kingdom, and the power and the glory” at the conclusion of the Lord’s Prayer.  Use it as a congregational response to prayers about scary, bad things that happen and make us wonder if the bad guys are winning.  Describe these things with “When…., it seems that evil is in charge.  Help us remember that….”


a  Late Addition from November 2010 that is still worth remembering:  Yesterday, it seemed like “the world is going to end” talk is not currently floating through the world of children.  But, this morning the fifth and sixth graders brought up something they are hearing about “we’re all going to die and the world will end with natural disasters in 2012.”  I did not get all the details, but apparently there is such talk around – at least in this area.  The easiest way to address this with children is simply to read them Jesus’ statement that no one knows this date, then to restate to them “anyone who tells you when the world will end is wrong PERIOD.”  Be emphatic.  Put yourself on the line, telling them that if anyone tells them that the world is going to end on a certain date they can tell them that their pastor/teacher says Jesus says that is not true.  A blatant conversation like that will linger in the back of minds until it is needed.  (Since posting this we have passed the dreaded 2012 end of the world date.  Again I know of no widely discussed end of the world dates in the immediate future, but they are always around.  So, it remains important to prepare children for encounters with such predictions.)
Posted by Worshiping with Children at 10:00 AM