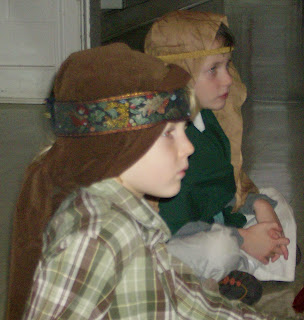 One small church in rural Virginia is including its fewer than ten children, mainly preschoolers and younger elementary schoolers, in worship during Advent this year by asking them to lead the congregation in one carol each week.  The children will learn the song (or part of it) during Sunday School and wear costumes (as they wish) to sing the carol at the beginning of worship as the Advent wreath is lit.  That church will be singing some of their favorites with their children.  If I were doing this, I’d consider some of the following:


“O Come, O Come Emmanuel” with the children costumed as townspeople singing the chorus (with congregational backup) in response to the choir’s verses.


“Angels We Have Heard on High” with the children costumed as angels (or shepherds if they don’t want to wear the halo) singing the chorus (with congregational support) in response to the choir’s verses.


“Gentle Mary Laid Her Child” with children in whatever Christmas pageant costumes they choose while standing around a manger singing the first verse on their own.  The congregation joins in on other verses.


Or in pageant costumes and standing at a manger to sing the choruses of “What Child is This?” in answer to the congregation’s questioning verses.


“We Three Kings of Orient Are” with children wearing crowns and other royal regalia to sing the first verse and all the choruses.  Older individuals might be prepared to sing each of the king’s verses as solos (probably without crowns, but….?).


You get the idea.  The possibilities are endless.  The goal is to include children in worship each week of Advent and to teach them (and the congregation) some carols.  It is also be a simple way to hold a series of pageant-type scenes without holding a full blown pageant that requires another trip to the church.
NOTE: This post appeared several weeks ago on the Facebook page.  I am just now remembering to post it here also.
Posted by Worshiping with Children at 8:51 AM

Email ThisBlogThis!Share to TwitterShare to FacebookShare to Pinterest
Labels: Carols