> This story may be the scariest story in the Bible for children.  They hear it from Isaac’s point of view and ask, “Would God ask my parents to kill me and if God did would they do it?”  God looks really threatening.  Pondering this question makes it almost impossible for children to get to a positive message about trusting or obeying God.

> If you must read the story in worship, introduce it as the scariest story in the Bible and promise a happy ending.  Even suggest that parents and children hold hands to hear it.  IMMEDIATELY after reading it, FORCFULLY point out that Isaac was never in danger.  God had other plans (there was a ram hidden in the bushes).  In fact, in those days other religions insisted that parents sacrifice their first child to their god.  God, however, does not, never did, never will.  Given that, this scary story is actually a wonderful, happy story.  Invite parents and children to give each other hugs and the whole congregation to say “alleluia!” or the usual congregational response (e.g. The Word of the Lord!  Thanks be to God!) with great joy.


> Preachers generally use this story to explore the importance of trusting or obeying God.  There are better stories to do this with children, e.g. the Hebrew slaves walking away from slavery through the sea and into the desert with Moses or David facing Goliath trusting God.


> Spend some time with this psalm as it is read.  Choose The Good News Bible (TEV).   Before reading it, introduce the complaint “how long?” citing times we say it today, e.g. when waiting for our turn, when waiting for a child to stop whining about something, when waiting for anything you don’t like to end, etc.  Note that this is a “how long” psalm with the psalmist asking God how long all the bad stuff will last, then asking God to help, and finally remembering that God does help us when there is trouble.  Invite the congregation to join you and the psalmist saying the “how long’s” like you mean them and reading the ending like you do remember that God is with you in the tough times.


Based on Today’s English Version


> The message in this passage is too complicated for young children.  But older children and youth benefit from this story in which people must choose between two prophets who claim God is about to do opposite things.  Young people today also face conflicting claims of what are the good and right things to do and be.


> This is one lection I would enlarge.  Read verses 1-16 following the two prophet script below.  Briefly introduce the two prophets, Babylonia, and the significance of wearing a yoke.  As you do, remember that the value of this story is less knowing ways in which Hananiah and Jeremiah disagreed, and more in realizing that people in the Bible were confronted with hard choices about who to believe.  Stand the prophet readers near the middle of the chancel where they can face each other as they read, going “toe to toe.”  Direct the Jeremiah to face the congregation to tell his story and face Hananiah when speaking to him.  Challenge the worshipers to imagine themselves in the crowd hearing what these two prophets said.


Jeremiah (facing the congregation):  In that same year, in the fifth month of the fourth year that Zedekiah was king, Hananiah son of Azzur, a prophet from the town of Gibeon, spoke to me in the Temple.  In the presence of the priests and of the people he told me that the Lord Almighty, the God of Israel, had said:


Jeremiah:  (Facing congregation)  Then in the presence of the priests and of all the people who were standing in the Temple, I said to Hananiah:  (Turn to face Hananiah)  “Wonderful! I hope the Lord will do this! I certainly hope he will make your prophecy come true and will bring back from Babylonia all the temple treasures and all the people who were taken away as prisoners.  But listen to what I say to you and to the people.  The prophets who spoke long ago, before my time and yours, predicted that war, starvation, and disease would come to many nations and powerful kingdoms.  But a prophet who predicts peace can only be recognized as a prophet whom the Lord has truly sent when that prophet’s predictions come true.”
(Turn back to the congregation)  Then Hananiah took the yoke off my neck, broke it in pieces, and said in the presence of all the people:


Hanaiah:  “The Lord has said that this is how he will break the yoke that King Nebuchadnezzar has put on the neck of all the nations; and he will do this within two years.”


Jeremiah:  (face congregation)  Then I left.  Some time after this the Lord told me to go and say to Hananiah:   (face Hananiah)  “The Lord has said that you may be able to break a wooden yoke, but he will replace it with an iron yoke.  The Lord Almighty, the God of Israel, has said that he will put an iron yoke on all these nations and that they will serve King Nebuchadnezzar of Babylonia. The Lord has said that he will make even the wild animals serve Nebuchadnezzar.”
(Almost as an aside to the congregation)  Then I told Hananiah this, and added, (facing Hananiah)  “Listen, Hananiah! The Lord did not send you, and you are making these people believe a lie.  And so the Lord himself says that he is going to get rid of you. Before this year is over you will die because you have told the people to rebel against the Lord.”

> If you are going to explore the yoke, display a yoke or a picture of a yoke and explain both how it is used and what it meant to say God will put a yoke upon your neck before reading the scripture.

> The Romans text for today also deals with recognizing the difference in the good and evil choices we encounter.  Look there for ideas about exploring such choices with children.


> I’d let these verses stand apart from the rest of the psalm and other texts for the day.  On their own they are a hymn filled with praise words.  Write each praise word on a poster.  Give each poster to one child talking about the word as you do.  Then challenge children to put their poster over their head every time they hear their word as the psalm is read.  (In the TEV the words include love, faithfulness, happy, worship rejoice, praise, and goodness.)  Let the children keep their posters to decorate with markers or crayons during the rest of the service.


> This is Paul at his long, complicated, repetitive, best.  Children are quickly lost as it is read.  But, Paul IS speaking to them.  They will however depend on worship leaders to present Paul’s message in a way that they can understand.


> Paul’s bottom line is that people have to make choices between serving the good and serving the evil.  Their choices have consequences.  It is the old “choices lecture” that kids hear repeatedly this time on a cosmic scale.

> All fantasy literature (e.g. Narnia or Lord of the Rings) are built on heroic characters choosing to ally with good against evil.  Harry Potter is the most currently popular fantasy saga among older children.  Two boys Tom Riddle and Harry Potter are born with the same wizarding powers.  Tom chooses evil and becomes the monster Lord Voldemort.  Harry chooses good and becomes a hero who saves people.  In these stories evil and good are clearly forces with great powers at work in the world.  Each person must side with one of them.  Choices matter – a lot!  The challenge is to suggest to children that good and evil are as real in our world as they are in Harry’s world.  Just as it was sometimes hard for Harry and his friends to know who was on which side (Professor Snape constantly puzzled people), it is sometimes hard for us to know what is good and what is evil.  And, it is just as important that we recognize and choose to side with good.  As examples, try


Clothes, food, games are advertised to us as things we MUST have to be OK.  When we buy into that, we become greedy and jealous and spend our whole lives worrying about what we have and wear.  That is a bad choice and is a way of siding with evil.


> The Contemporary English Version provides the translation that makes most sense to children.  (NIV is a close second.)  Before reading it, tell listeners that Jesus was speaking to his disciples sending them out on a mission trip.  He has given lots of instructions, then says….


> In context this is comfort for disciples taking on a big task, i.e. the people who welcome you will be welcoming me, those who give you something as little as a cup of cold water will be rewarded.  In worship, however, these verses are often used to explore the possibility of seeing Christ in other people and treating them accordingly.  Work with this by


Ø Projecting faces of people from around the world while reading these verses – or even just verse 40.

Ø Instead of projecting pictures, give each worshiper a picture of a person to hold and think about as you talk about the verse.  Challenge them to see Christ in that person.  Urge them to keep the picture and pray for that person this week.  (Portraits, by National Geographic photographer Steve McCurry, is a soft bound book of hundreds of postcard size photographs of people.  It is easily cut apart into a collection of individual portraits, each a prize winner.)


Ø Or, instruct worshipers to look at the faces of people around them as you read verse 40.  Next ask them in their minds to recall the face of each person in their family before reading the verse again.  Finally, ask them to think of the faces of people they will see at work or wherever they will go this week before reading the verse a third time.


Ø Go to Anna's Hosannas for a script for a children’s time which explores what it means to see God in another person. 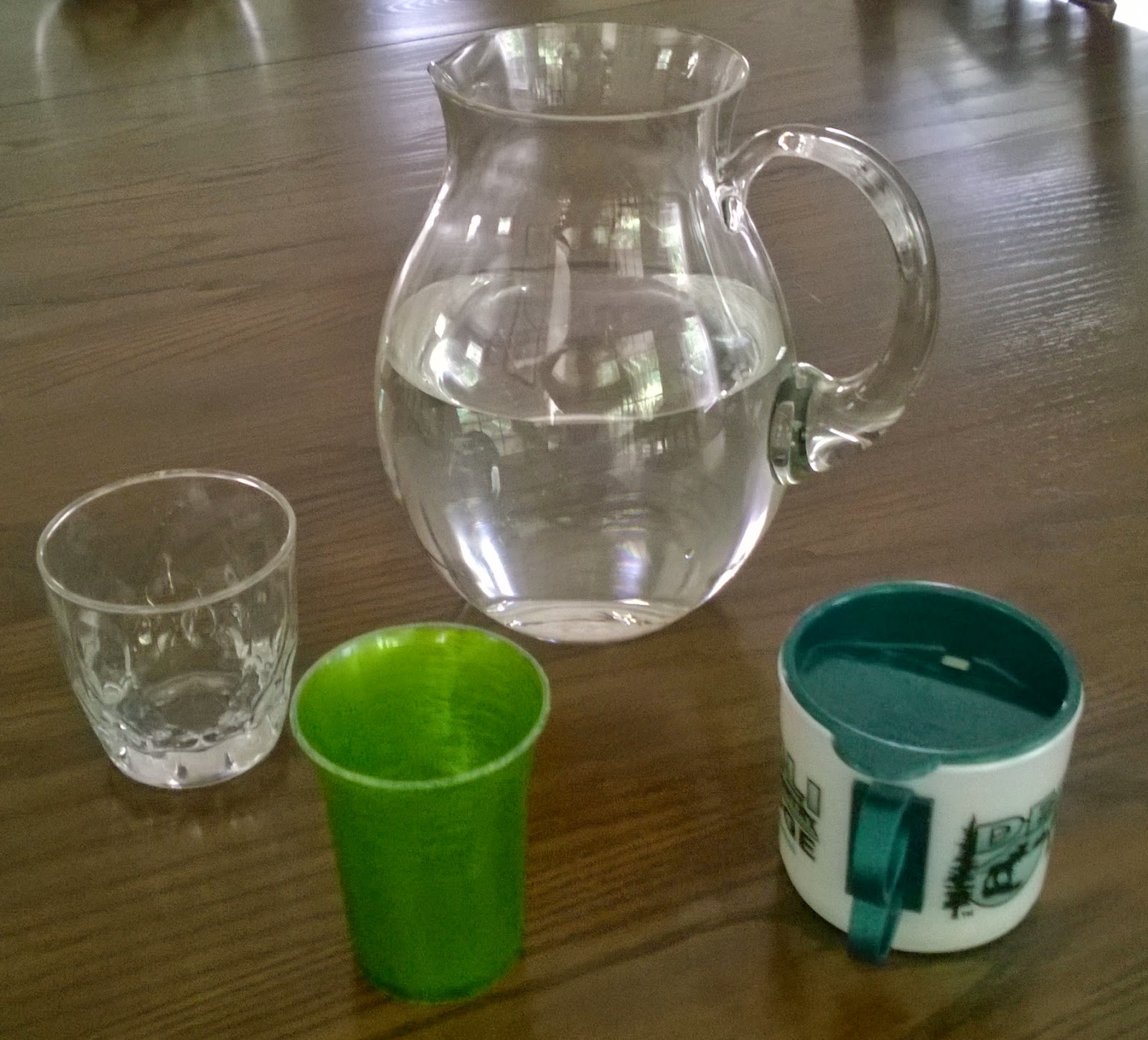 > In a lighthearted spirit, read verse 42.  Offer all worshipers (or children gathered at the front) a small cup of cool water.  After drinking the water and savoring it, point out that nice as that was, Jesus wasn’t telling his disciples to give people cups of cold water to drink, but to provide what they need.  Then, introduce the ministry of hospitality.


> Identify a variety of hospitality ministries in which your congregation shares, taking care to cite some in which children participate.  In my congregation those would include:


Ø Volunteers provide lemonade, coffee and cookies after worship services so people can get something to drink and so they can stand around and visit with each other.


Ø The deacons organize the delivery of meals to people who are sick or have other problems that make it hard to get meals on the table.


Ø All the churches in the community take turns hosting homeless people during the winter months.  Dinner and breakfast are served, beds provided, even laundry done.  Church members (including families with children) spend the evening talking, playing cards, and getting to know these guests.


Ø Food drives for the local emergency food bank and an international disaster relief offering include children in giving “cups of cold water” in Jesus’ name.
Posted by Worshiping with Children at 11:56 AM