Year B - Planning for NINE Summer Weeks of David Stories (2015)

The Revised Common Lectionary allots NINE! Sundays in Year B to the stories of David (June 14 through August 9 in 2015).  David, the man after God’s own heart, has lots to offer worshipers of all ages.  He is a hero whose only super power is his trust in God’s power, who occasionally messes up in big ways and regrets it, and who loves God always.  He is a soldier, king and prayer poet.  The “kid stories” like David and Goliath include themes with which adults struggle.  Even the most “adult” story, David and Bathsheba, can be heard and appreciated by children i.e. David wanted Bathsheba as his wife sooo much that he broke rules he knew were important and killed her husband to get her.  The stories could make a wonderful summer series of worship experiences in which the stories are well told/read/presented, savored, and explored.  To get started consider the following:

Look at the whole list of stories..  The RCL did not include every story and split some into two weeks.  I’d omit one or two they list and think they missed some great stories.  (The ones in bold italics are those I added.)  Choose the ones for your series.

There are several stories about David, Jonathan and Saul’s relationships that could be combined in different ways.

+ David spares Saul’s life again, this time taking the spear and jug beside him when David found him asleep.  (Use either this story or the one just above.)
1 Samuel 26

+ Abigail negotiates peace between David and her husband – a wonderful, strong story about a woman who was a peacemaker
1 Samuel 25:2-42
“Nabal the Fool” in The Children’s Bible in 365 Stories, by Mary Batchelor, offers a shorter, easier to follow version of the story.

+ David cannot build the Temple but gets a covenant with God
2 Samuel 7:1-14a

Don’t just read these scripture texts.  Use your best storytelling arts to present the stories for the congregation to savor. In the weekly posts you will find reading scripts, pantomime directions, and other presentation suggestions.  Invite worshipers of all ages to work with you in presenting these stories.


Some of the stories presented in the Bible are the result of numerous editors and thus are long, repetitive in spots, and simply hard to follow.  Turn to children’s Bible story books for more straight forward tellings.  The Children’s Bible in 365 Stories, by Mary Batchelor, which includes 30 stories about David many of which are among the lectionary readings, is an especially good source.

Each week add to a David figure an item that recalls the day's story. 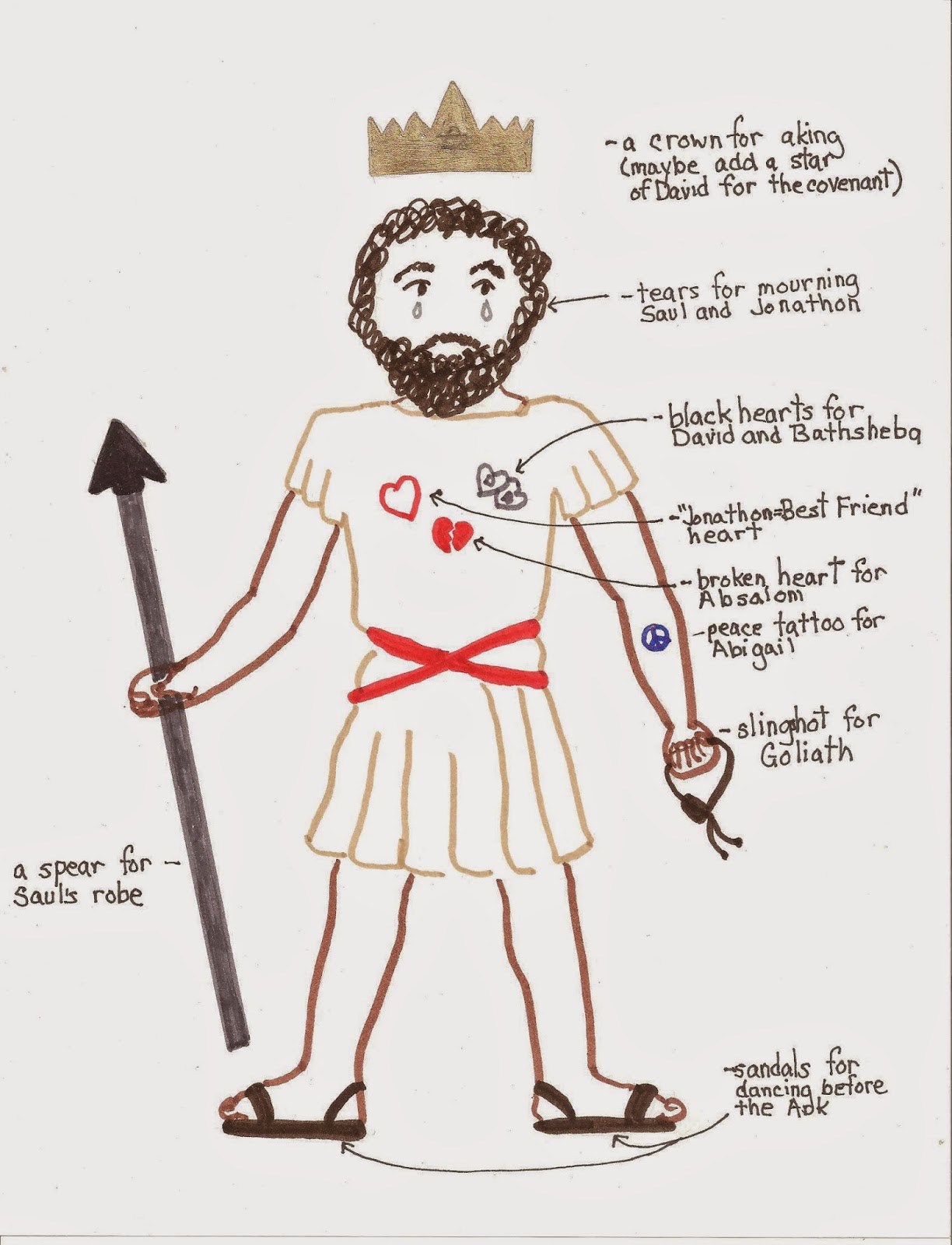 The figure could be a freestanding figure cut from foam core or a figure glued or painted to a fabric banner.

+ Crown for David’s head
When Samuel anoints him to be King the crown is placed above his head, then is lowered to sit on his head if you read story of David being crowned.

+ Slingshot for the Goliath
+ Red heart bearing words “Jonathon, My Best Friend”
+ Spear for either the cave or sleeping in the tent stories in which David
doesn’t kill Saul
+ Peace patch or tattoo for Abigail
+ 2 gray tear drops for David mourning Saul and Jonathon when they are
killed in battle
+ “Praise God Always” speech balloon or sandals for dancing before the Ark
+ Star of David (maybe added to his crown) for the Davidic covenant
+ 2 black interlocked hearts one labeled David the other Bathsheba
(or D and B)
+ One broken red heart labeled Absalom

Look at the David the folks at First Presbyterian Church Hightstown New Jersey created.  WOW!  Thank you for sharing this infomative slide Lisa Day.  The rest of us would love to see what other did at their churches. 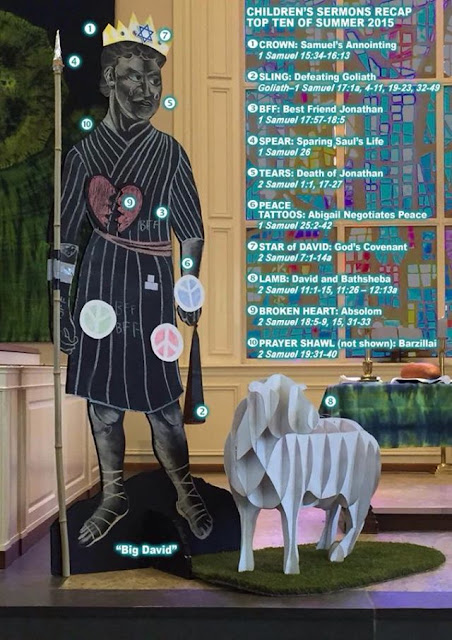 David, the Psalm Singer
David expressed his faith in dozens of psalms that he wrote and sang.  Some are generic, but many relate to specific events.  Take time to connect those psalms to the stories that go with them.  Pretend to be David praying them in each situation.  Identify situations in which we need to pray them today.  Look for me to add more psalm suggestions to those already in place for each Sunday.

PSALM 23
Encourage worshipers of all ages to learn Psalm 23, David’s most well know psalm, by heart this summer.  Provide a Psalm 23 bookmark or other such award for reciting it to you.  Rather than asking only children and youth to do this, challenge the whole congregation.  Celebrate older members who can do it on the first Sunday of the series AND anyone who joins them as the weeks go on.

Posted by Worshiping with Children at 2:31 PM