According to the RCL the Second Sunday after Christmas this year falls on Sunday, January 3, the day before children head back to school, most adults know that Christmas is for sure over and we are all settling back into life as usual.  The texts for this day however are meditations on the meaning of Christmas.  So consider several options:

Read these texts on December 27, two days after Christmas, when worshipers are still very much in the Christmas mode, but are ready to relax a little and ponder what Christmas might mean in the coming year.  It is an especially good choice since the First Sunday after Christmas Day texts feature the stories of Jesus in the Temple at age 12 and Samuel serving in the Temple with Eli.

If you read Second Sunday texts on Dec 27, read one of the following on January 3
-          the New Year’s Day texts (see New Years Day resources here)
-          the First Sunday after Christmas texts which focus on Jesus in the Temple at 12 and Samuel in the Temple (good for back to school Sunday).  See those resources at First Sunday after Christmas (2015)
-          Find texts for Epiphany (2015) if you will not celebrate it on Wednesday

Whichever texts you use on January 3, make the day festive.  Call the congregation back from the holidays.  Involve children in ways that will get families there and help them reestablish the church habit for the remainder of the school year.

IMHO I’d use these texts this year on December 27 and turn the whole service into readings and carols following Mark Bozutti-Jones’ Jesus the Word, a wonderful retelling of John’s prologue.  See details below.

Jeremiah promises that one day the Jewish exiles will return and life will be good for God’s people in Jerusalem.  The only way to use this (especially on the Sunday after Christmas this year) is to think in terms of Christmas/New Year’s wishes for all refugees in the world.  That is a bit of a stretch, but may be possible.  If you do,

* Sing “Gather Us In” which names all the people called to God’s table.  Before singing, place pictures of refugees from around the world today around the crèche.  As you place them, identify them and wish for them what Jeremiah wishes for the exiled Jews.

* If you celebrate communion today, use a rough plate and cup.  Note that there are refugees today eating and drinking from such cups at both meals and Eucharist.

* Pray for Refugees today.  Prepare individuals of all ages to light votive candles from a central candle and place them one at the time around the crèche or on the Table with prayers for specific groups of refugees.  Or, use a globe to pray your way around the world focusing on refugees.

All three of these texts are hard to use on the Sundays after Christmas Day.  This story of the role of Wisdom in the salvation story requires more explaining and teaching than anyone is up for on either the second day after Christmas or even on January 3.  Psalm 147 is a nationalistic song praising God who takes care of God’s special people.  Instead of any of them, I’d turn to either Psalm 146 (go to  First Sunday after Christmas Day) or Psalms 96 or 98 which were suggested for Christmas Eve, but may work better on a Sunday soon after Christmas Day.  Below are two suggestions.

Group 1:     The right hand and holy arm of the Lord
have won the victory
The Lord has made known this victory,
And showed righteousness
to all the nations.

Group 1:    Make a joyful noise to the Lord, all the earth;
break forth into joyous song
and sing praises.

Group 2:    Sing praises to the Lord with the lyre,
with the lyre and the sound of melody.

Group 1:    Let the sea roar, and all that fills it;
the world and those who live in it.

Group 2:    Let the floods clap their hands;
let the hills sing together for joy
at the presence of the Lord;
who is coming to judge the earth.

All:             The Lord will judge the world
with righteousness,
and the peoples with equity.

Based on the New Revised Standard Version

* Turn the first three verses of this Psalm 96 into a responsive reading leading into the benediction.

sing to the LORD, all the earth.

People:       Sing to the LORD, bless his name;
tell of his salvation from day to day.

Leader:       Declare his glory among the nations,
his marvelous works among all the peoples.

There is no translation in which children can catch this message as it is read.  They depend on the preacher to unpack it and present it to them in terms they can understand.  There are several key ideas they appreciate.  Each idea could be presented as the best Christmas gift ever – but gifts that will not stack up against bicycles or electronics in kids’ minds.

God chose us before we could choose God.  Actually these verses say God chose before the world was created.  God did not wait to see if we deserved to be chosen, God just chose us.  Infant baptism illustrates this with water.  Babies, who do not even know what is going on, are identified as God’s sons and daughters.  Unlike team captains who carefully evaluate players before choosing their teams, God chooses us without checking us out.

Jesus gives us forgiveness, the gift we cannot see but which is the best gift we will ever get.  Jesus who had the power to get even in really big ways with those who killed him, instead forgave them and promises to forgive us when we mess up, too.  That is a good promise to have as we go into a new year.

If you feel brave, compare Santa and Jesus.  Santa brings toys to good children who deserve them.  Jesus loves us no matter how we act and forgives us when we mess up.  Wade into this conversation with care because the big difference between Santa and Jesus is that Santa is imaginary and Jesus is real.  That is a difference you do not want to address “on the steps.”

* Sing Once in Royal David’s City or What Child Is This to connect the baby to the man.

John does not begin his gospel about Jesus with stories of shepherds and magi.  Instead he starts off with a poem filled with abstract pictures of who Jesus is and why he is important.  Before Christmas, children are ready to hear only the nativity stories.  A couple of days after Christmas when things have settled down a bit, older children are ready to hear and begin unpacking John’s poem. 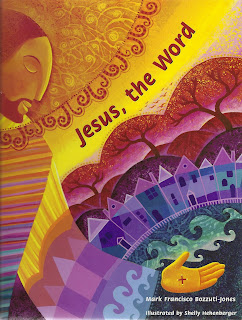 * Jesus, the Word is Mark Francisco Bozzuti-Jones’ presentation of this text.  It is wonderfully stated and beautifully illustrated.  It begins introducing the Word, then tells us that Jesus was the Word and lists many of the things he did during his life.  It briefly recounts his death and resurrection and insists that he is still with us now.  The story is held together by the Word’s repeated promise, “I will set you free.  I won’t let you be anything by holy, good and free.”  Read it in worship to answer the questions “who was Jesus?” and “why was the baby Jesus so special?” Worshipers of all ages respond warmly to it.  Read it in several ways.

Read it during the sermon or children’s sermon in approximately 5 minutes.

Read John’s poem.  Then, read the book as one person’s attempt to put John’s poem into their own words.

Read the book in sections interspersed with hymns and carols to meditate on the meaning of Christmas in the calm of December 27.  The script below offers several song suggestions for each section.

Because the book has no page numbers, I have printed the opening and closing phrases of each section below.  There are several song choices in hopes that there is one that fits your congregation.  I chose ones that children are more able to sing with a little understanding.

In the beginning before everything…. God’s Love, God’s Word
“Holy, Holy, Holy”

In the beginning, the Word created heaven and earth
Light and ….  food for all bodies… one with all things.
“All Things Bright and Beautiful”
“I Sing the Mighty Power of God”
“This Is My Father’s World”

The Word came to earth … The Word of God said: I will set you free.  I won’t let you be anything but holy, good and free.  The Word spoke through the ages for all people… just like you and me.
“God of Abraham Praise”
“Guide My Feet”
“Guide Me O Thou Great Jehovah”
“From All That Dwell Below the Skies”

The Word came down from heaven.…  The Word was Jesus!
“Away In A Manger”
“Gentle Mary Laid Her Child”
“What Child Is This”
“The First Nowell” (choose verses that tell the whole story)

Jesus the Word living among us and with us … The Word spoke through the ages for all people… just like you and me.
“Tell Me the Stories of Jesus” – maybe omit last Palm Sunday verse
“O Sing a Song of Bethlehem” – verses 1-3 (omit Calvary verse)

But some people turned their backs on Jesus the Word….  Jesus the Word, died and was buried.
“Were You There” (verse 1 and 4)
“O Sing a Song of Bethlehem” - last verse (the Calvary verse) only

But on the third day, Jesus, the Word, rose from the dead…. went up to heaven.
“Jesus Christ is Risen Today”
“Christ Is Alive” (verses 1 and 5)

But the Word did not leave us….  The Word speaks through the ages for all people…  just like you and me.
“Once in Royal David’s City”
“There’s A Wideness In God’s Mercy”
“Go Tell It On the Mountain”

***************************************************
* To introduce the Word in John’s Prologue to the children, start with familiar phrases about people and their words.
She’s as good as her word
You have my word for it
Do what I say (as well as what I do)
Actions speak louder than words
“Don’t speak of love, show me” – My Fair Lady
In response to words (about something), “Prove it!”
(show me with your actions)
He’s all words (and no action)
Insist that on Christmas when Jesus was born God made good on all God’s promises and words and that everything God had ever told people was poured into Jesus of Nazareth.

see New Year's Day resources here* Introduce this as a new Chrismon ornament based on John’s poem about Jesus.  Point out the triangle for Father, Son and Holy Spirit and the eye for God watching us at all times.  Then look at the waves of communication that God sends out of both sides and even the top.  God watches us, is with us, and communicates with us everyway God can. 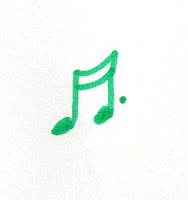 * Once in Royal David’s City is a child friendly singing version of John’s poem.  Challenge worshipers to listen for answers to the question “why is Jesus important?” as they sing the song together.
Posted by Worshiping with Children at 5:11 PM