In North America school schedules are all over the place, but many schools start summer vacation in late May or early June.  “The Last Day of School” is huge for children.  Starting with this week I’ll be looking for connections between specific texts and end of school for children.  Then, the week after Easter look for a more general post about how to raise this big event in the congregation’s worship whenever it happens.

Today’s texts are filled with rocks.  Some are quite real – the ones hurled at Stephen.  Others are symbolic – cornerstone, living stones, and “my rock and fortress.”  Adults enjoy the plurality of symbols.  Children who have trouble getting the meaning of symbols can be overwhelmed.  On this day it does not help that the real rocks were weapons and the symbolic ones point to God’s steady trustworthiness.  So alert the children to all of the rocks, but focus for them on just one or two kinds of rocks.
Have a pile of rocks front and center.  Depending on
your focus it could be a big pile or be arranged as a wall, even intersecting walls.  A local landscaper may even loan you a pile of rounded “river rock.”
At the beginning of the service point to the rocks and urge worshipers to watch for rocks in scriptures, prayers and songs today.  You may even want to briefly describe some of the rocks you will feature.
Acts 7:55-60
R This text assumes listeners know how Stephen got himself into enough trouble to be stoned.  Most children (and many adult worshipers) do not.  For them, expand the reading.   Start with Acts 6:8-15, offer a brief summary of his sermon, and then read Acts 7:55-60.
R Children need to be told that stoning is killing a person by throwing rocks at them.  Note that it is a very cruel way to kill a person.  You may or may not want to note briefly that it is still practiced today in some countries.
R Stephen is a hero who stood up to the crowd.  Doing so cost him his life, but he thought speaking about Jesus was worth dying for.  Children often find themselves in situations in which they must stand up to their friends refusing to do something they know to be wrong.  Stephen’s story provides both a hero to emulate and a warning that standing up to the crowd often causes trouble – fortunately the trouble is not often lethal.  Still sometimes standing up to the crowd is the right thing do, even when the crowd fights back.  Martin Luther King is reported to have repeatedly told his children that a person “who had nothing that was worth dying for…was not fit to live.”  This is a sober conversation, but it calls children to eyes-wide-open, heroic living.
R If you explore Stephen as a hero, sing some new verses for “Lord, I Want to be a Christian.”
Lord, I want to be a Christian…
Lord, I want to be like Stephen…
Lord, I want to be courageous…
Lord, I want to be forgiving…
Lord, I want to be like Jesus…
R If you will be focusing on the living stones in 1 Peter, consider replacing the Acts 7 reading with Acts 6:1-7, the calling of the first deacons.  If your congregation has deacons, this is a great opportunity to introduce some of them and describe their work to the children (and other adults).  Deacons are in this case examples of people who are serving in one specific way as living stones in the church.  Be sure to point to others as well.  (FYI - This text does not appear in the Revised Common Lectionary at all, but is the Roman Catholic reading for this day.)
Psalm 31:1-5, 15-16
R This prayer for protection is filled with rock images that are unfamiliar to children.  If you want them to “get it” introduce key rock words before the reading.  Rock of refuge and strong fortress need only a brief definition.  But, “my rock” needs fuller explanation.  Talk about what it means to say a person is a rock.  Remind them that Peter in Hebrew means “rock.”  Jesus told Peter he was going to be his rock.  End by noting that many prayers and hymns refer to God as our rock.  Only then, read the psalm.
R Many rock images in hymns need explaining to children – even “A Mighty Fortress is Our God.”  Point them out before singing.  If you sing “A Mighty Fortress,” get the congregation to look at the first line of each verse.  Put them into your own words.  This gets the rock message out.  Children may get lost in the rest of the lines, but they will catch the beginning key phrases.
1 Peter 2:2-10
The writer refers to God’s people as “a holy race, a royal priesthood, a holy nation” and a spiritual house composed of living stones.  I’d go with the last one.  There are several ways to develop it in worship.
﻿﻿﻿
﻿﻿﻿﻿﻿﻿ 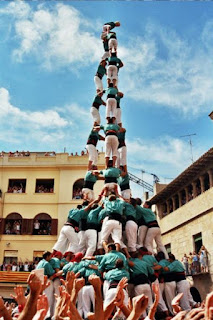 Ø  Enjoy the picture of a human tower.  Then point to one of the people somewhere in the middle of tower and ask what would happen if that person decided to go home.  After realizing the importance of each person in the tower, point out that the church is a lot like that tower.  If any one of us decides to quit on our job, it makes a big difference.  Cite specific examples, e.g. what if the organist decided not to come today?  What if the fellowship hour person decided not to put out the cookies and lemonade?  Then point to one child and ask what if NAME didn’t come today.  There won’t be any immediately obvious thing that will not happen, but that person will be missed.  Compare them to one of the people in the middle of the tower and recall their importance.  (Link: http://commons.wikimedia.org/wiki/File:3d10_fm_de_vilafranca.jpg.)
OK, this is perilously close to an object lesson.  But, I think that taking time to carefully describe both sides of the metaphor (the people in the tower and the people in the church) will make it understandable to children.  I’d be curious to hear from anyone who tries it how it went.
Ø  Before deciding whether to use the cornerstone image, ponder how frequently you use it in worship and how clearly your congregation claims it.  There are 10 biblical references to the cornerstone.  Psalm 118:22 is read every year on both Palm/Passion Sunday and Easter.  One is read in Year A after Pentecost and 3 others are read in Year B after Pentecost.  That may place the cornerstone at the margins in some congregations.  Other congregations, especially those with a significant cornerstone in their building, may speak frequently about Christ the Cornerstone.   In the latter case it is worth your time to carefully introduce the image to children.  If you do, try one of the following:
R If you have a pile of rocks up front, be sure there is a squarish one.  Use that stone as a cornerstone and line up the other rocks as walls.  Demonstrate the function of the cornerstone in setting the direction of the walls and insuring the stability of the whole building by laying out good and not so good rock foundations on the floor.  Then, explain that the church often says that Jesus is our cornerstone.  He shows us how we need to live as God’s people and thus makes sure that the church is strong.  Offer specific examples of ways churches can stray from Jesus’ directions, e.g. not paying attention those around them in need. 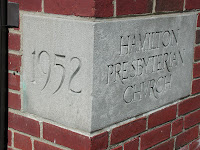 R If you have a cornerstone in your building, tell
about it, show a picture of it, and encourage people to find it after worship.  Then introduce Jesus as the “real” cornerstone of you church, citing things you do because Jesus directs it.
R Sing “We Are the Church” by Avery and Marsh to celebrate all the living stones that make up your congregation.
R To illustrate the fact that the church is not a building, but people, lead the congregation in the finger play, “Here is the Church.”  This could be embedded in the sermon.
Here is the church
Here is the steeple
Open the door
See all the people.
You can have a church
Without any steeple.
But you can’t have a church
Without any people.
R If school is ending and your congregation is going into summer mode, this is an opportunity to point out that the church is not a brick or wood building, but a human building and that they are “living stones” in that building.  Describe some of the things the living stones in your congregation will be doing during the summer, e.g. mission trips, Bible School, camps, etc as groups and lots of other things as individuals and families.  In an informal setting, hear summer plans.  In a more formal setting, describe some plans.  You might even create a bulletin board and invite people to add pictures of their summer “living stone” activities.  Leave it in a place the congregation see frequently for the whole summer.
John 14:1-14
R Jesus' discussion with Philip in verses 8-10, “whoever has seen me has seen the Father,” is the heart of this reading for children.  It is a good Sunday to bring out pictures of Jesus in action.  Ask worshipers to tell the story in the picture.  Conclude each description with “God is like that!”  If this is a children’s time, close in prayer thanking God for sending Jesus to show us what God is like.
R Sing “Once in Royal David’s City.”  Enjoy singing it out of season.  Read through the second verse and even the fourth before singing it to help worshipers see why it makes sense to sing it during Easter season and how it goes with this reading.
R Many adults and most ministers associate this text with the many funerals at which it is read.  Hearing it brings an “oh that again” sigh.  But, it is new to children and few of them connect it to funerals.  Their inexperience invites worship leaders to explain to them what a funeral is and why these verses are so often read at funerals.  There is a lot we don’t know about what happens after we die.  God has kept that secret, maybe as a surprise.  Name some of the guesses people have made about harps, streets of gold, wings and halos.  Be clear that these are just guesses.  But we do know for sure, because Jesus tells us so in these verses, that God will be with us and take care of us after we die.  So we and every person we love who dies are OK.
Posted by Worshiping with Children at 10:58 AM