R Children, who would like to see or at least hear God “really”, “like in the Bible,” are fascinated by this story of Moses asking to see God.  Since it is hard for them to catch the story as read from most translations, either tell it in your own words or read it from a children’s Bible.  My choice would be “Moses Sees God” from Lectionary Story Bible: Year A, by Ralph Milton, p. 222.  (Reading time: 4 minutes)

R Note that what Moses saw, “the back of God trailing glory” was mainly light and reminds you of the burning bush where Moses first met God.  Lift the candle from the Moses display (Go to Year A - Moses Display Overview ) while you talk about God’s glory, then return it to its place.

R Make a big word poster bearing the word glory printed in bright gold metallic marking pen or gold glitter pen.  You might even ask an artist (young or old) to write the word with flourishes or decorative touches.  Display the poster and introduce the idea of God’s glory.

R To further explore the idea of God’s glory and do some worship education about a line in the Lord’s Prayer, create a litany naming attributes of the glorious God.  To each one the congregation responds, “Thine is the Kingdom and power and the glory forever.”

God, you are the Alpha and Omega.  You were here before anything else existed and you will be here when everything and everyone has come to an end.

Creating God, you spoke and the entire universe came into existence.  You know the secrets of stars and dark holes and far flung galaxies.

Lord of the Whole Creation, you are aware of each tiny creature on each planet.  You pay attention to insects and birds and even us.

God of History, you call us to be your people.  You appointed us to take care of this planet Earth.  You gave us rules for living well together.  You call us to great things.

Loving God you created each one of us.  You know us by name and watch over us.  You are with us when everything is wonderful.  And, you walk with us through our worst days.

God of Mercy,  You know everything we do, the good and the bad.  And, still you do not give up on us.  When we mess up, you call us back to yourself and you forgive us when we don’t deserve it.

R Knowing God is dangerous.  God told Moses that the people would be consumed if God went with them into the Promised Land.  They couldn’t take it.  When Moses came back down the mountain, his face shone so brightly that he wore a veil over his face so he wouldn’t frighten people too much.  He was changed, forever different after his little glimpse of God’s glory.  Children as well as adults can be told that knowing God is dangerous for them, too.  God can lead us to do things that are hard – making friends with the outcasts, standing up for what is right, loving even our enemies, forgiving those who wrong us.  Only the truly brave want to get involved with this glorious God.

R The Roman Catholic lectionary calls for Isaiah 45:1, 4-6 thus omitting the long list of ways God would pave the way for Cyrus.  If children are introduced to Cyrus before the reading, they can follow either lection, but the shorter one is easier for them.

R Before reading either lection, introduce Cyrus as the king of Persia where the Jews had been taken as exiles after Jerusalem was destroyed by the Persians.  Point out how very unpopular this king was with the Jews who first read this.  Then invite worshipers to listen for the surprising thing God had to say about this foreign king who did not even know God’s name.  Be sure to go back to Cyrus putting God’s message clearly into your own words in the sermon.  I predict that if you say, “Remember Cyrus the hated king of the Persians” little heads will pop up all over the room as children tune in to hear what the deal was with Cyrus.

R The point is that God who is Lord of the whole Universe uses people who don’t even admit that God exists.  God is that powerful.  God also does things that we may not like.  The Jews in that day did not like being taken away to live in Babylon.  In children’s words – God is not like a fairy godmother who waves a magic wand to give you a dress for the ball or like Tinker Bell who can make you fly by scattering fairy dust on you.  God is the Great God of the Universe.  God is doing big important things.  It’s our job to recognize where God is working and join God there.  It is not God’s job to figure out what we want and to join us here.

Both of these psalms praise God’s greatness and power meant to fill the whole universe.  Both need to be read loudly by the whole congregation.  They are not meant for “inside voices” but for “loud, happy outside voices.”  For a shorter reading, use Psalm 99 omitting verses 6-8.  For a longer reading that really gets into the praise spirit of the psalmist and uses everyday vocabulary, turn Psalm 96 into a choral reading for leader, choir, and congregation.  Before reading, practice the first line together reading it loudly to fill the heavens with your praise.  (If the leader and choir set the volume up, the congregation will follow.  A brief rehearsal or conversation with the choir before the service might help.)

Leader:         Declare the glory of the Lord among the nations,
and God’s marvelous works among all the peoples.

People:          For all the gods of the peoples are idols,
but the Lord made the heavens.

Leader:         Oh, the honor and majesty of the Lord’s presence!
Oh, the strength and beauty of God’s sanctuary!

People:          Ascribe to the Lord the glory due God’s name;
bring an offering, and come into the courts of the Lord.

Leader:         Worship the Lord in holy splendor;
tremble before God, all the earth.

People:          The world is firmly established; it shall never be moved.
The Lord will judge the peoples with equity.”

Choir:            Then shall all the trees of the forest sing for joy
before the Lord; for the Lord is coming,
for God is coming to judge the earth.

R Since this begins a series of readings from the first letter to the Thessalonians, take a moment to introduce the letter, the senders, and the receivers.
Ø  Show its location in the big pulpit Bible or help worshipers find it in their pew Bibles.
Ø  Using the table of contents, point out all the letters in the New Testament and note that as we read over the shoulders of those who first read them we find that we have lots of the same problems and that we can learn from them.
Ø  To prove that Thessalonica is a real place project or display photographs of the city as it exists today and/or point to it on a map.
Ø  Explain that Paul had started this church years before this letter was written and that he was really good friends with lots of people there. 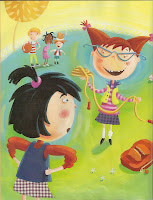 R Paul compliments the Thessalonians saying they are making a big difference in their town by living like Jesus every day.  To explore what it means for children today to make a difference by living like Jesus, check out The Recess Queen, by Alexis O’Neill, (see the review at Children's Literature: A Resource for Ministry, Lectionary Links, October 16, 2011).  This book would have to be read with the children up close to see at least some of the pictures.  (Read aloud time: 5 minutes – and you better practice the whacky, rhyming words.)  After reading it, I’d ask “Who in this story was most like Jesus?” then “What makes you say that?” and finally “Could anyone do that?”  and “How would you describe a kid who did something like that?”  Then very briefly note that Paul says the Christians in Thessalonica were a lot like Katie Sue and suggests that we can be too.

R The problem of taxes is not of great interest to children – even in today’s loud political debates about taxes.  Older children begin to catch and enjoy the way Jesus trapped his questioners in their own trap.  But, they need step by step explanations to do so.

R Mainly, this text reminded me that it is Stewardship Season in many congregations.  That led me to pondering the opposing facts that this season is a great opportunity to train up young as well as adult stewards and that most congregations focus almost entirely on adult stewards (after all they are the ones with the moneyJ).  That pondering led me to pop off a “Children, Money and the Sanctuary” post listing possibilities.  Find it at Children, Money and the Sanctuary.

R This week would be a good week to steal the offertory from the choir.  Invite the children forward as the offering plates are passed.  Let them watch from the front what is happening.  Talk about why the church collects money each week,  Name 2 or 3 ways the church uses the money.  If appropriate, put the prayer of dedication into your own words showing them where it is in the bulletin.  Then send them back to their seats as the intro to the Doxology is played.  Urge them to sing the Doxology and read the dedication prayer with the congregation.
Posted by Worshiping with Children at 10:25 AM