There are three sets of texts for Christmas Eve/Day in the lectionary.  Since most of the time we have only Christmas Eve services, I have looked at all of the texts and make suggestions for those most interesting to children.  As I looked over the past posts for Christmas Eve/Day, I notice that when Christmas falls in the week makes a big difference.  So, to create a post that especially fits the 2012 calendar, I have gathered relevant ideas from 2010 and 2011 to post here.  You may still want to check out Year A and B posts for ideas I chose not to bring here. 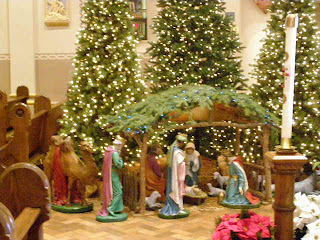 T  If you have been moving crèche figures around the sanctuary during Advent, tonight is the night to add the baby and move the shepherds, sheep and angels into place.  If you have not displayed a crèche, add one tonight.  During a children’s time have the children help you retell the story as together you move or place the figures.  An unbreakable crèche is a real asset on this night when “accidents are prone to happen.”

This is the most child-friendly of the set Isaiah readings.  Unfortunately, it is so long that children get lost in the middle.  For their sake, edit it to Isaiah 9:2, 6-7.

Psalm 98 is the best of the psalms for children.  It offers many short praises that children can join the congregation in reading.  Groups 1 and 2 might be the congregation and the choir or two halves of the congregation.   The reading is probably better suited to Christmas Day, but could also be a psalm for Christmas Eve.

Group 1:         The right hand and holy arm of the Lord
have won the victory
The Lord has made known this victory,
and showed righteousness to all the nations.

Group 1:         Make a joyful noise to the Lord, all the earth;
break forth into joyous song and sing praises.

Group 2:         Let the floods clap their hands;
let the hills sing together for joy
at the presence of the Lord;
who is coming to judge the earth.

based on the New Revised Standard Version

T  For the children on Christmas Eve, it is all about Luke’s story.  They are well served by services of lessons and carols that walk them through the story.  Do take care to select a few carols they likely know.  Go to Annotated List of Christmas Carols Children Can Sing in the Sanctuary for an annotated list of carols from which to choose. 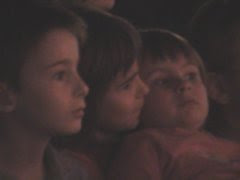 T  For family oriented services, lessons and carols invite some visual drama to grab the attention of children hyped up on Christmas Eve.  As each lesson is read, costumed youth and adults move around the sanctuary as the stories are read.  (Christmas Eve excitement makes this not a good night for a children’s pageant.  Children do best watching the youth and adults who are the age of the originals walk through the story.  A child shepherding with a parent is one exception.)  Actors may speak or simply walk through their part as readers read.  Mary and Joseph walk up the center aisle leave out a side door.  Shepherds, angels and their reader may appear in the balcony.  The Magi may come one at the time bearing their gifts regally up the central aisle and bow in front until the end of the reading.  It is often easier not to build a final scene, but to have the characters leave the sanctuary after their reading.  This leaves space in the front for choirs, extra musicians, poinsettias, etc.  I have posted the script for such a service that was developed at Trinity Presbyterian Church in Atlanta.  Find it at Family Friendly Christmas Eve Service of Lessons and Carols.

T  If you follow a more “standard” order of service, consider having the gospel read by several costumed shepherds.  They could be members of one family (families often stayed out together to care for the sheep) or a group of teens (bet they often got the overnight shift).  This version is set for three readers.  It could easily be adapted for more or fewer.  It would also be possible to have one reader read verses 1-7 about the birth, then let the shepherds take it from there.  The shepherds could read from the usual upfront Bible or around a microphone an unexpected corner of the sanctuary.

Shepherd One:   In those days a decree went out from Emperor Augustus that all the world should be registered. This was the first registration and was taken while Quirinius was governor of Syria. All went to their own towns to be registered.

Shepherd Two:   Joseph also went from the town of Nazareth in Galilee to Judea, to the city of David called Bethlehem, because he was descended from the house and family of David.  He went to be registered with Mary, to whom he was engaged and who was expecting a child.

Shepherd Three:  While they were there, the time came for her to deliver her child.  And she gave birth to her firstborn son and wrapped him in bands of cloth, and laid him in a manger, because there was no place for them in the inn.

Shepherd One:  In that region there were shepherds living in the fields, keeping watch over their flock by night.

Shepherd Three:  and they were terrified.

Shepherd Two:   But the angel said to them, “Do not be afraid; for see—I am bringing you good news of great joy for all the people:  to you is born this day in the city of David a Savior, who is the Messiah, the Lord.   This will be a sign for you: you will find a child wrapped in bands of cloth and lying in a manger.”

Shepherd Three: And suddenly there was with the angel a multitude of the heavenly host, praising God and saying,
“Glory to God in the highest heaven,
and on earth peace among those whom he favors!”

Shepherd One:  When the angels had left them and gone into heaven, the shepherds said to one another,

Shepherd Two:  “Let us go now to Bethlehem and see this thing that has taken place, which the Lord has made known to us.”

Shepherd Three:   So they went with haste and found Mary and Joseph, and the child lying in the manger.

All shepherds: This is the Word of the Lord!
from the New Revised Standard Version

T  Hebrews 1:1-4 (5-12) could be called God’s proud parent speech.  Use verses 1-3 to explore why Jesus and his birthday are so important.  Verses 2a -3 are an ancient hymn (for today’s purposes one of the first Christmas carols).  Using the script below, one leader could put the lines of the song into his/her own words to clarify them for the children while reading the psalm. Or, one leader could read the psalm with a second leader offering explanations in response to each line.  Particularly if you chose the latter, it might be wise to reread the text uninterrupted afterwards.

In the past, God spoke to our ancestors many times and in many ways through the prophets,
Recall Moses, King David and other familiar prophets who were God’s leaders
but in these last days he has spoken to us through his Son.
Jesus is different from all these wonderful people in the past.

He is the one through whom God created the universe,
Jesus was present at the creation of the universe
the one whom God has chosen to possess all things at the end.
Jesus will be there at the end of the world.
He reflects the brightness of God’s glory and is the exact likeness of God’s own being,
Jesus isn’t like God, Jesus IS God.  Every story about Jesus is a story about God.
He sustains the universe with his powerful word.
Jesus is present right now holding things together. After achieving forgiveness for human sins,
he sat down in heaven at the right-hand side of God, the Supreme Power.
Jesus died on the cross and rose again forgiving us and now is with God.

Based on Today’s English Version

T  Christmas Eve is also a good night for reading a children’s Christmas story.  Check out my evolving list at Christmas Storybooks for Worship.

T  Out of the sanctuary note:  Providing child care for infants and toddlers on Christmas Eve allows parents to take their older children to worship.  Many families will decide to stay home rather than risk taking their youngest to the sanctuary and thus miss out on Christmas worship.  And, some families try to bring children who are too tired and off schedule to make it through the service without causing pain to all around them.  So, hiring child care workers at even twice their normal hourly wage is a significant gift to the entire congregation.  If your usual staff are made aware of this well in advance, many will gladly arrange their plans to be at the church and reap the extra financial reward.

Posted by Worshiping with Children at 4:13 PM