On September 15, 1963 four men threw a bomb into the basement of Birmingham, Alabama’s Sixteenth Street Baptist Church during the Church School Hour.  Four young girls who were getting ready for their parts in Youth Sunday worship were killed.  17 others were seriously injured.  Later that day 2 black teenage boys were killed in the aftermath.  One of them was shot by a white teenager who was an eagle scout.  The theme of the service for that day was “Love That Forgives.”  The text was to be Luke 23:34.  Many congregations in Birmingham plan to worship around that theme on September 15, 2013, the 50th anniversary of that sad day.  They also invite congregations around the country and even the world to join them.  Go to On the Chancel Steps for more information, links, and resources.  "On the Chancel Steps" is the children's sermon blog of Frances Woodruff  who serves a Birmingham congregation and is on a planning team for this important anniversary.  Look below for my ideas about how to include children in these services.


Children are understandably frightened by this story because violence comes to children in a place they assume is safe.  They need to hear the story with minimum details and be reassured as far as possible that this was one terrible event and that they are generally safe – how far that is true unfortunately depends on your children and situation.


This event was 50 years ago and takes place during a time of extreme discrimination and legalized segregation.  Today’s children, thought they still struggle with racism, have not experienced that.  They need to hear from those who did experience it the details of what it was like and a confession of how very wrong it was.  Hearing about separate schools, restaurants and businesses that did allow black people to enter at all, movie theaters with seating areas for each race, separate marked drinking fountains, and black people forced to sit at the back of a bus or give up their seat if a white person needed one amazes today’s children.  They need to be told it was the way things were and that even though most white people knew it was wrong, they did not stop it.  It took lots of brave people (mainly black people but also white people) standing up together in demonstrations to insist that changes be made.


_ Displaying and discussing photographs from that time helps children realize that what you are saying is true.


_ Actually exploring this unjust situation may have greater impact on children than detailing the bombing.  They learn why the church in 1963 needed to think about forgiveness and why that forgiveness may still be needed today. 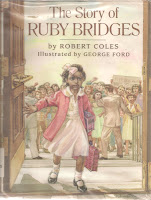 _ The Story of Ruby Bridges, by Robert Coles, may be the best story to read or tell on this day.  It does not deal with the bombing in Birmingham but with first grader Ruby Bridges who integrated an elementary school in New Orleans.  Each day as she walked through the screaming mobs she prayed the same prayer,


Please God, try to forgive those people.
Even if they say those bad things,
They don’t know what they’re doing.
So You could forgive them,
Just like You did those folks a long time ago
When they said terrible things about You.


Though it takes almost ten minutes to read the whole book, it would be worth the time.  If you must shorten it, briefly introduce the situation and begin reading with “Then one morning, something happened.  Miss Hurley stood by the window….”  This book is probably available in your public library.


_ This story could be read and discussed before a responsive prayer of confession listing current situations of injustice with the congregation responding, “Father, forgive them and forgive us.”  (Even non-readers can catch and repeat such a short prayer.)
_  To give children a way to be part of the ongoing undoing of racism, give each one a paper bracelet printed with the name of one of the girls.  Instruct them to wear the bracelet in her honor until they have done one thing to reach out to a person of the other race.  They may sit with a person of another race in the lunchroom at school or on the bus, have a conversation with a person of another race, even just share a smile.  Brainstorm possibilities as the bracelets are distributed and put in place.  (Maybe give bracelets to worshipers of all ages with comments about how this task may be different for people of different ages).


UUU Order bracelets with cross patterned edges and space for writing a message at $5.25 for 96 bracelets.  They come with self-adhesive tabs.  Find them at Oriental Trading Company


_ Create a prayer of confession or intercession using photographs of unjust situations that need our attention today.  Newspapers or National Geographic magazines are good sources.  Photographs may be displayed or scanned and projected. (If you do the latter, purchase a copy of the book and refuse to share your scanned version for any purpose no matter how worthy.)  With the children identify the injustice in each photo, then show each one offering a prayer using their words.  To each prayer, worshipers respond with a one line prayer such as “God, forgive us and them.” Or “God, give us the courage to make some changes.” 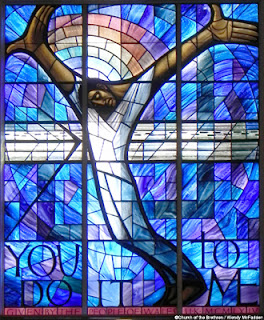 _ Children are particularly interested in the stained glass window that was put in the renovated church.  John Petts, a sculptor in the country of Wales, was so upset by what happened that he contacted his local newspaper and together with the editor launched a campaign to buy a new window for the church.  They accepted contributions no larger than a half crown.  Many of the contributions came from children.  Within two years they had paid for and delivered a stained glass window that featured a large African Jesus.  That window is the center of the sanctuary today.


Simply show a picture of the window and tell the story.  Or, point out the fact that Jesus in this window is black.  Imagine together how black people who were members of the church in 1963 might feel about that picture.  Also ponder what it means to people of all races today to see this window and know its story.


_ To set this verse in context and give it full impact, read it first, challenge worshipers to listen for when Jesus said these words, and read verses 32-38.  The point for children is that Jesus forgave the people who killed him and made fun of him while he was dying.  From that fact you can explore both Jesus' amazing power to forgive us  no matter what and our call to forgive others in much usually less demanding situations.

_ God’s Dream, by Archbishop Desmond Tutu and Douglas Carlton Abrams, speaks in generalities which are hard for children to grasp.  But it contains another strong statement about forgiveness especially of racial hatred from one with important credentials.  So, before reading the story, briefly tell about the end of apartheid in South Africa with the Truth and Reconciliation Commission.  To sharpen your focus read and discuss only the part of the book about forgiveness.
Posted by Worshiping with Children at 7:55 AM