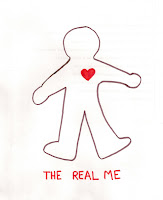 R As you begin:  Heart shows up repeatedly in today’s texts.  “Cut to the heart” in Acts; “Slow of heart” and “our hearts burned within us” in Luke.  “Love one another deeply from the heart” in Peter.  To help children understand this metaphorical language, early in the service display a picture of a human heart, a valentine heart, and a copy of “the real me” poster.  Discuss the similarities and differences in the three hearts.  Take time to introduce “heart” as another word for “the real ME,” i.e. our minds, feelings and actions all rolled into one.  Read the heart phrases that you will use in worship and urge worshipers to listen for them.
R At the benediction, pick up the poster again and build your charge and promise using the key heart phrases of the service.
Acts 2:14a, 36-41
R To bring this reading to life, set the scene at 50 days after Easter and either summarize or read verses 22-24 to flesh out Peter’s message about Jesus.  One reader then reads Peter’s message from the pulpit.  A second reader rises from the congregation to read how the crowd responded.  This reader may be seated on the first row and turn to face the congregation or may be seated (probably with a radio mike) in the middle of the congregation rising to read in place.
Acts 2:14a, 22-24, 36       Reader in the pulpit
Acts 2:37-41                     Reader rising from the congregation.
R People responded to Peter’s message.  They didn’t just listen, they did something.  They believed and got baptized.  It is a good day to walk children and the congregation through the believing rituals of your congregation – infant or believer’s baptism, confirmation, and such practices as first communion rites or Rite 13. Describe them and illustrate them by having a prepared person who has recently undergone each ritual stand as you describe it.  In some congregations you may be able to ask the person to say briefly what was important about that ritual for him or her.  Try to include people of all ages.  (This may be helpful for many adult worshipers who are new to your traditions as well as lead children to look forward to their rites of believer’s passage.)
Psalm 116:1-4,12-19
This psalm could have been prayed in gratitude by the converted on Pentecost, but it is identified in Psalms as the prayer of one who has recovered from serious illness.  It is filled with word pictures that children do not understand as presented.  So, given all the other texts have to offer children, I’d leave this for the adults.
1 Peter 1:17-23
R The sacrificial language (ransom, blood of Christ, lambs) made quick sense to everyone in the first century.  It does not make any sense to children today.  The animals they know are pets - really friends- or humanized characters in loved stories.  They are offended by the idea that God would required the death of an animal or the shedding of any blood to forgive us.  Actually, many modern adults do not find this language a particularly helpful description of Jesus death and resurrection.  “God loved us and forgave us even when we crucified Jesus” or “God loved you so much that God would rather die than stop loving you” make more sense.

R Bring out or point to the “The Real Me” poster and reread the phrase “love each other from the heart.”  Talk about the difference in saying you love someone, but then not treating them well (for example, saying you love a sibling, then being mean to them in front of your friends) and loving them with your whole heart all the time in all situations.

R One theme that children will not hear as the text is read is that it is important to know what lasts (is imperishable), what doesn’t last, and to live paying attention to the things that last.  Parents work on that all the time trying to help children see that what they think they gotta have or do right now may not be so important in the long run.  Peter was encouraging the Christians in Turkey to think the same way.  What lasts is God’s love and forgiveness especially as Jesus showed it to us.  It lasts even beyond our death.  So, remember that when you can’t have some of the things that do not last right now.
Start by identifying things that don’t last.  Shoes and clothes, electronic gadgets, toys or games etc.  Then name things that do last.  Parental love is basic.  (Most children count on the love of at least one parent, even if there has been a divorce.)  And, most important is God’s love and forgiveness that last forever – even after we die.  Point out that we need to remember what doesn’t last and what lasts forever.
Luke 24: 13-35
R Invite the children to help you present the gospel reading by coming forward and joining you at a corner of the front of the sanctuary.  Take your Bible with you to join them.  Explain that today’s gospel is the story of a trip.  It began with a walk of seven miles.  Identify a local landmark that is 7 miles from the church.  Then invite them to walk with you around the perimeter of the sanctuary (or down the center aisle and back if there are no side aisles) as you read the story.  Follow the directions on the script below.  (The script can be enlarged and printed in two columns on a letter size page that lays on an open Bible providing larger print for reading ease.)  This can be done with all the children without rehearsal or with a pre-enlisted and rehearsed group – maybe one or two church school classes.
___________________________________
The Road to Emmaus
START FROM A FRONT CORNER
Now on that same day two of them were going to a village called Emmaus, about seven miles from Jerusalem, and talking with each other about all these things that had happened.  While they were talking and discussing, Jesus himself came near and went with them, but their eyes were kept from recognizing him.  And he said to them, “What are you discussing with each other while you walk along?”
COME TO FULL STOP
They stood still, looking sad.  Then one of them, whose name was Cleopas, answered him, “Are you the only stranger in Jerusalem who does not know the things that have taken place there in these days?”
CONTINUE WALKING AND READING
He asked them, “What things?” They replied, “The things about Jesus of Nazareth, who was a prophet mighty in deed and word before God and all the people, and how our chief priests and leaders handed him over to be condemned to death and crucified him. But we had hoped that he was the one to redeem Israel.  Yes, and besides all this, it is now the third day since these things took place.
Moreover, some women of our group astounded us. They were at the tomb early this morning, and when they did not find his body there, they came back and told us that they had indeed seen a vision of angels who said that he was alive.  Some of those who were with us went to the tomb and found it just as the women had said; but they did not see him.”
BE AT THE CENTER AISLE AT THE BACK BY NOW
Then he said to them, “Oh, how foolish you are, and how slow of heart to believe all that the prophets have declared!  Was it not necessary that the Messiah should suffer these things and then enter into his glory?” Then beginning with Moses and all the prophets, he interpreted to them the things about himself in all the scriptures.
STOP AT OTHER FRONT CORNER
As they came near the village to which they were going, he walked ahead as if he were going on.  But they urged him strongly, saying, “Stay with us, because it is almost evening and the day is now nearly over.”
So he went in to stay with them.  When he was at the table with them, he took bread, blessed and broke it, and gave it to them.  Then their eyes were opened, and they recognized him; and he vanished from their sight.  They said to each other, “Were not our hearts burning within us while he was talking to us on the road, while he was opening the scriptures to us?”
That same hour they got up and returned to Jerusalem;
RUN ALL THE WAY BACK TO THE STARTING CORNER BEFORE READING
(probably breathlessly) and they found the eleven and their companions gathered together. They were saying, “The Lord has risen indeed, and he has appeared to Simon!”  Then they told what had happened on the road, and how he had been made known to them in the breaking of the bread.
FOLLOWED BY  “The Word of the Lord…” or any response that follows the gospel reading.
^^^^^^^^^^^^^^^^^^^^^^^^^^^^^^^^^^^^

R Especially if it is a Communion Sunday, connect this meal to the sacrament.  Point out that the two travelers understood who Jesus is when he broke bread and said their hearts burned within them.  The same is sometimes true when we celebrate communion.  Tell an example of this for you.  (I would probably tell of sharing communion with a Jamaican youth group our youth group worked with on a mission trip.  Suddenly everything I had ever said about the worldwide family of God became much truer.  These kids were different from us in many ways, but we shared Communion.  We were brothers and sisters in Christ.)  Note that sometimes when we celebrate communion it seems that the bread is just bread and the juice just juice.  But sometimes at communion we understand something about Jesus in an entirely new and important way.
R      Sing “Open My Eyes That I May See.”  Introduce it as a song the travelers should have sung – the first verse on the trip with Jesus and the third on the return run to tell the other disciples what happened.  We can join them in singing all three verse every day.
R A couple of tidbits that might interest the children:
According to Luke, Jesus chose to appear after the resurrection first to a couple of unimportant women and then to two all but unknown disciples rather than any of the 12.  It’s another case of Jesus’ attention to those who like many children are often overlooked.
The two travelers’ questions echo those of Thomas last week.  Once again Jesus says it’s OK to ask questions.  He does chide them gently for not figuring things out more quickly, but then he patiently explains exactly what happened with Jesus and what it means.
Jesus’ gentle treatment of the travelers echoes his treatment of the disciples in the locked room last week.  The resurrected Christ does not ask “where were you?” or even “where do you think you are going now?”  Instead he meets them where they are and helps them figure out what is going on and where they need to go – back to Jerusalem.
Posted by Worshiping with Children at 8:33 PM