T'is the day after Christmas and ... 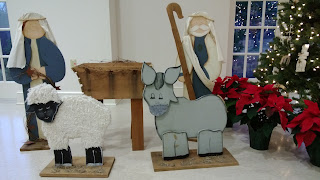 T’is the day after Christmas and …  well, I’m pondering my experience in the overflow seating area on Christmas Eve.  There were 7 of us who simply couldn’t squeeze into the small historic sanctuary of the church my husband is serving.  A large circle of chairs had been prepared in the fellowship hall near the big beautiful Christmon tree and a small crèche.  We had bulletins, hymnals and candles for the candle lighting service.  Sound, but no video, was piped in.  Still one of us was four and a half years old and another was just over two.  They were trying, but it was clearly not going to be a great hour for them.  We ended up bringing in crayons and paper from a nearby church school room.  The children colored quietly on the floor in our midst.   (I’m still smiling at the memory of a purple tights covered bottom in the air coloring with delight.)  Communion was brought from the sanctuary.  Seeing how “into his candle” the older boy was, he and I went to the sanctuary and lit our candles in the back of the aisle and sang Silent Night.  He was mesmerized.  What I am pondering is what if…
*  there was a worship center in the middle of the circle on a low table?
*  there was an Advent wreath that the children there could light as the one in the sanctuary was being lit?
*  there was bread and cup on the table here to be passed among us rather than brought from the sanctuary?
*  the crayons and paper were already there and the children invited to use them?
*  someone was prepared to show the pictures from a Nativity picture book as the story was read over the speakers from the sanctuary?
*  there was a worship leader there to act as host for the whole service?


IMHO older children should get priority for sanctuary seats where the feel of Christmas is strongest.  But, maybe a well thought out overflow space would be especially welcoming to families with young children high on Christmas.


I know Christmas Eve is a year away, but does anyone have other “what ifs” to add to this “think ahead list”?
Posted by Worshiping with Children at 2:50 PM